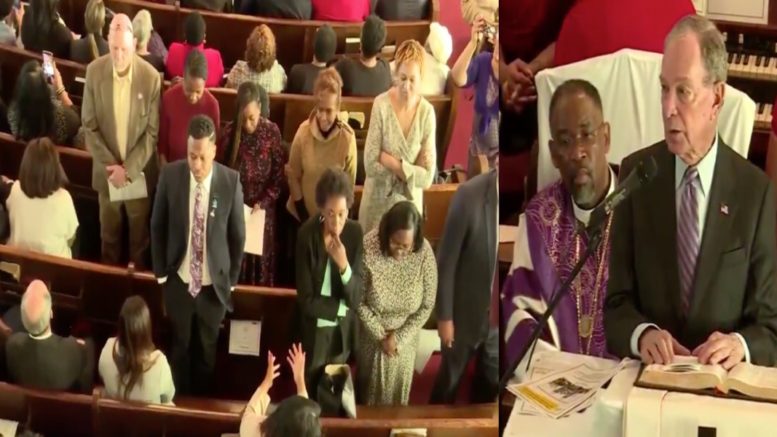 On Sunday, people in the attendance at the historic Brown Chapel AME Church in Selma, Alabama, turned their backs and silently protested 2020 presidential candidate Michael Bloomberg as he delivered remarks there.

While he addressed the congregation during a church service, in which he discussed voter suppression and the fight for civil rights, some in attendance rose from their seats and turned away from him.

Before Michael Bloomberg spoke, he was introduced by the Reverend Leodis Strong, a pastor for the historic church, which was a key meeting place for activists during the civil rights movement.

Rev. Leodis Strong said he encouraged the former mayor to come to the church on the 55th anniversary of “Bloody Sunday,” when white state troopers attacked black marchers at the Edmund Pettus Bridge.

Also attending the service at Brown Chapel was former Vice President Joe Biden, who won Saturday’s South Carolina primary, and Stacey Abrams, who unsuccessfully ran for governor of Georgia in 2018, per CBS News. (Continued Below)

As per the New York Post, It’s not clear what the congregants were protesting, but Bloomberg has been heavily criticized for using the stop-and-frisk police tactic while mayor. He has apologized for defending the practice.

On March 3, 2020, also known as Super Tuesday, the largest number of states have their primaries on the same day. Alabama is among one of the 14 states going to the polls for Super Tuesday. (Video Below)

Bloomberg went to a church this morning in Alabama and people in attendance turned their backs to him as he spoke.

Some Brown AME church attendees are turning their backs to Mike Bloomberg. More are joining. pic.twitter.com/gTAaTNiew1

About 10 people now standing. They got up toward the end of Bloomberg’s speech. Others in the crowd continued to listen, clap.