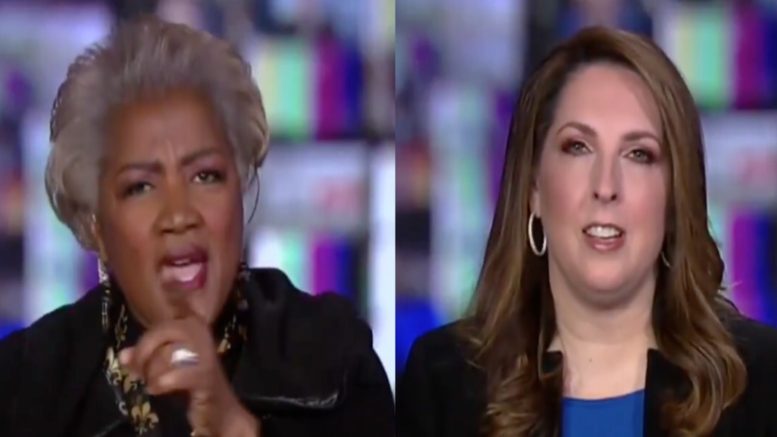 Hosts Sandra Smith and Ed Henry had played a pre-recorded clip, in which Ronna McDaniel suggested the possibility that Democrats will have a “brokered convention”, rigged against Senator Bernie Sanders (I-VT).

“It does depend on how big the lead that [Bernie] Sanders takes out of California is if he picks up a huge proportion of delegates. But I don’t see anybody getting out soon and it’s leading toward potentially a brokered convention, which will be rigged against Bernie if those super delates have their way on that second vote,” Ronna McDaniel said on Fox News Tuesday.

Donna Brazile became frustrated with the GOP Chairwoman’s statement and told her to “go to hell!”

“First of all, I want to talk to my Republicans– first of all, stay the hell out of our race. Stay the hell out of our race. I get sick and tired … of listening to Republicans tell me and the Democrats about our process. First of all, they don’t have a process. They’re canceling primaries. They have win or take all. They don’t have the kind of democracy that we see on the Democratic side,” Brazile claimed.

“And for people to use Russian talking points to sow division among Americans, that is stupid. So Ronna, go to hell! This is not about– No! Go to hell!” Brazile vented. “I’m tired of it, Ed. We’re not trying to prevent anyone from becoming the nominee. If you have the delegates and win, you will win.” (Continued Below)

“This notion that somehow Democrats are out there trying to put hurdles or roadblocks before one candidate, that’s stupid,” the former chair of the DNC continued. “I know what’s going on. They are scared of Democrats coming together to defeat Donald Trump. They need to be focusing on what we’re focusing on in the Democratic Party, and that is preventing foreign interference in our elections.”

Ronna McDaniel took to Twitter to respond after Donna Brazile told the GOP Chairwoman to “go to hell”. (Continued Below)

“It’s ok, @donnabrazile. I’d be having a bad day too if my party was still hopelessly divided. Talk of a brokered convention and the DNC trying to stop Bernie obviously hit a little close to home,” Ronna McDaniel tweeted on Tuesday.

In 2016, WikiLeaks had revealed that Brazile, who was serving as the chair of the D.N.C. and was on leave from the network, had shared questions for CNN Democratic primary debates and town halls with Hillary Clinton’s campaign. (She later wrote a controversial memoir, in which she argued that the Party had favored Clinton over Bernie Sanders), reported The New Yorker.

Donna Brazile resigned from CNN in October 2016, three days after Wikileaks released an email in which Brazile said she got advance questions before a town hall event. “From time to time I get the questions in advance,” she wrote in the email. Wikileaks released more emails indicating that Brazile sent a question to the Clinton campaign, then wrote: “I’ll send a few more,” as per CNN. (Video Below)

The former chair of the DNC Donna Brazile just told @GOPChairwoman
to "Go to hell!"

THE LEFT IS COMPLETELY UNHINGED.

I’d be having a bad day too if my party was still hopelessly divided.

Talk of a brokered convention and the DNC trying to stop Bernie obviously hit a little close to home.