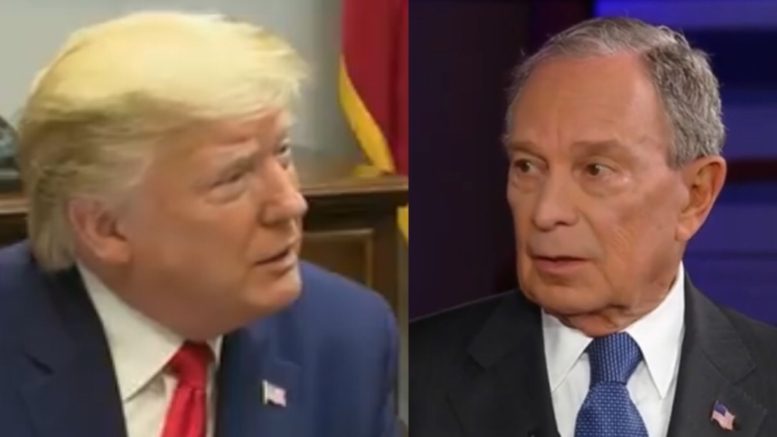 President Trump, who has been relentless in mocking Bloomberg over everything from his height to his debate performances, delivered his barbed observations on the race once more after Bloomberg dropped out, reported Fox News.

Mike Bloomberg released a statement on Wednesday and also tweeted in part: “Three months ago, I entered the race to defeat Donald Trump. Today, I’m leaving for the same reason. Defeating Trump starts with uniting behind the candidate with the best shot to do it. It’s clear that is my friend and a great American, @JoeBiden.”

“I’m a believer in using data to inform decisions. After yesterday’s results, the delegate math has become virtually impossible – and a viable path to the nomination no longer exists. But I remain clear-eyed about my overriding objective: victory in November,” Bloomberg said in his statement.

In backing the former vice president, Bloomberg said: “I’ve known Joe for a very long time. I know his decency, his honesty, and his commitment to the issues that are so important to our country – including gun safety, health care, climate change, and good jobs.”

President Donald Trump took to Twitter Wednesday to mock the failed Democratic candidate, saying that Bloomberg “didn’t have what it takes”. (Continued Below)

The president tweeted: “Mini Mike Bloomberg just ‘quit’ the race for President. I could have told him long ago that he didn’t have what it takes, and he would have saved himself a billion dollars, the real cost. Now he will pour money into Sleepy Joe’s campaign, hoping to save face. It won’t work!”

Mike Bloomberg responded to the president with a “Star Wars” video clip and wrote, “See you soon, Donald.”

In “Episode IV: A New Hope,” Darth Vader meets his old Jedi master Obi-Wan Kenobi in the halls of the Death Star for the first time since they fought on Mustafar and Anakin was left for dead. The two exchange a few fencing-like spars, and in a matter of two minutes, Vader slices his saber through Obi-Wan and kills him, as reported by Deseret News.

This is probably more accurate for your current mood.

Mike, you do understand that you wasted 1 Billion dollars and all you did was make @realDonaldTrump’s numbers go up? https://t.co/UiVhpdaA7w pic.twitter.com/kqe9Hx1xTX

Yoda finds someone even shorter than he is… pic.twitter.com/4JJzVMud5v

What are you gonna do, zap his ankles?

We leave you with a cringe Bloomberg dance:

How this did not win him the nomination a puzzle me for the rest of my life pic.twitter.com/S5A4lSIqsq