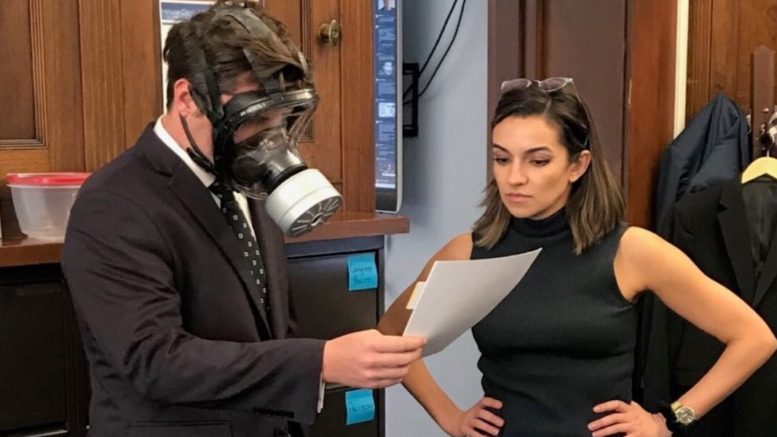 On Wednesday, Rep. Matt Gaetz (R-FL) turned heads on Capitol Hill when he showed up to Congress wearing a gas mask on the House floor to vote on the coronavirus funding bill.

The Florida lawmaker tweeted a photo of himself wearing the mask while reviewing an $8.3 billion emergency spending bill to combat the virus.

The $8.3 billion emergency funding bill to combat the coronavirus outbreak passed in a bipartisan vote of 415-2. The Senate is planning on passing the bill later this week to fast-track it to President Trump’s desk.

Senate Appropriations Committee Chairman Richard Shelby (R-AL) announced the deal in a press release. “We worked together to craft an aggressive and comprehensive response that provides the resources the experts say they need to combat this crisis,” Shelby said. “I thank my colleagues for their cooperation and appreciate President Trump’s eagerness to sign this legislation and get the funding out the door without delay.”

Senate Majority Leader Mitch McConnell (R-KY) told reporters Wednesday that the bill’s expedited passing is now paramount. “Our goal would be to do it this week if we get cooperation,” he said. (Continued Below)

The $8.3 billion package will be divvied up to focus on developing new treatments and preventing the virus’s spread, with over $3 billion in research and $2.2 billion for public response efforts. Another $1.25 billion will be sent overseas for the global effort to slow the pandemic’s spread, as reported by National Review.

Kash Jackson posted a video clip of Rep.Matt Gaetz on the House floor with his gas mask and wrote: “Rep.Matt Gaetz seems to be one of the last politicians with a sense of humor. Check him out wearing a gas mask to Congress.”

Matt Gaetz seems to be one of the last politicians with a sense of humor. Check him out wearing a gas mask to Congress.pic.twitter.com/TksjUaehq9