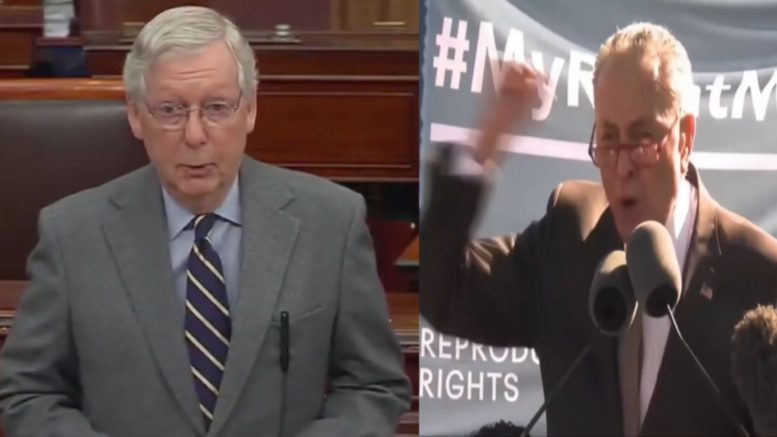 Senate Majority Leader Mitch McConnell (R-KY) blasted Senator Chuck Schumer on the Senate floor Thursday after the New York Democratic Senate minority leader appeared to threaten Supreme Court Justices, Neil Gorsuch and Brett Kavanaugh, saying that they “will pay the price”, while he spoke to activists and rallygoers on Wednesday.

At the rally hosted by the Center for Reproductive Rights, Schumer noted that the case, June Medical Services LLC v. Russo, is the first “major” abortion case since President Trump’s court picks have been on the bench. The dispute, dealing with restrictions over who can perform abortions, involves a Louisiana law similar to one in Texas that the court ruled unconstitutional in 2016, before either Trump justice was on the Supreme Court and before conservatives held a 5-4 majority, as reported by Fox News.

Chief Justice John Roberts rebuked Schumer for the remarks, saying that “threatening statements of this sort from the highest levels of government are not only inappropriate, they are dangerous,” and that the justices “will continue to do their job, without fear or favor, from whatever quarter.”

“There is nothing to call this except a threat,” Senator Mitch McConnell said on the Senate floor Thursday.

He blasted the left saying it is their own side of the aisle where “anti-institutionalism is rampant”, adding: “Most striking of all, had been the shameless efforts to bully our nations independent judiciary”. (Continued Below)

“And yesterday those efforts took a dangerous and disturbing turn,” Senator McConnell expressed. “By now, many already know what the Democratic leader shouted outside the Supreme Court yesterday morning. … First, he prompted a left-wing crowd to boo two of the Associate Justices, as those Supreme Court Justices were professional athletes and Senator Schumer were jurying from the stands.”

After reading aloud Schumer’s remarks into the record, the Senate Majority Leader stated: “I’m not sure where to start. There is nothing to call this, except a threat. And there’s absolutely no question to whom it was directed. Contrary to what the Democratic has since tried to claim, he very, very clearly was not addressing Republican lawmakers or anyone else.”

“He literally directed the statement to the Justices by name,” the Kentucky Senator pointed out. “And he said, ‘If you go forward with these awful decisions’, which could only apply to the court itself– the Minority Leader of the United States Senate threatened two Associate Justices of the U.S. Supreme Court, period. There’s no other way to interpret that.” (Continued Below)

“If he cannot even admit to saying what he said, we certainly cannot know what he meant. At the very best, his comments were astonishingly reckless and completely irresponsible. … No matter the intention, words carrying the apparent threat of violence can have horrific unintended consequences,” the Senator Majority Leader explained.

On Wednesday night, President Trump called for “serious action” to be taken amid Schumer’s comments. On Thursday morning, he tweeted: “Schumer has brought great danger to the steps of the United States Supreme Court!” (Video Below)

(Related: Sen. Hawley Announces He Will File A Motion To Censure Schumer For Attempting “Intimidation Of Supreme Court”)