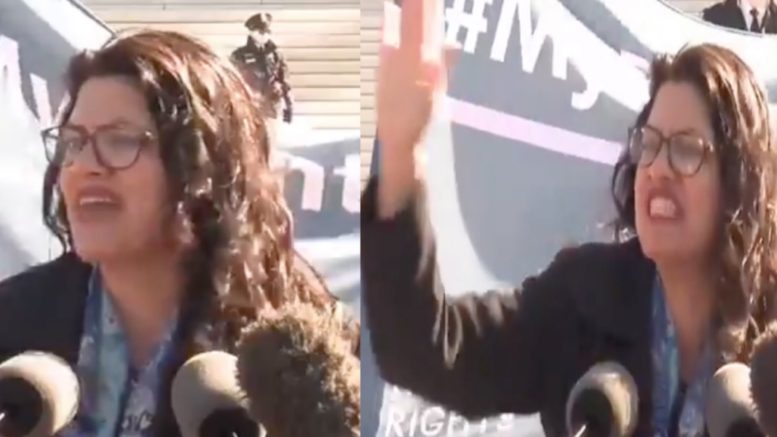 Rep. Rashida Tlaib (D-MI) said in front of the Supreme Court Wednesday that anti-abortion activists are “obsessed” with women’s bodies, and “maybe you shouldn’t even want to have sex with me, or you, or any woman”.

“This past year, I realized, my, my, my are they obsessed with our bodies, how we talk, how we look, what we stand for. I mean, this type of policing of our bodies is so interconnected to all the social justice movements all around the country,” Rep. Rashida Tlaib claimed.

“And let me tell you, this obsession with our bodies–You know, I, in the legislation, in the Michigan legislature for six years, used to say to people, ‘Yo, yo, you know what, you’re so freakin’ obsessed with what I decide to do with my body, maybe you shouldn’t even want to have sex with me, or with you, or with any woman,'” Tlaib declared.

At that same rally, Senator Chuck Schumer appeared to threaten Supreme Court Justices, Neil Gorsuch and Brett Kavanaugh, should they vote against abortion. (Continued Below)

(Related: Hollywood Actress Busy Philipps Erupts Into A Screaming-Laced Tirade At Pro-Abortion Rally: “I Will Never Stop Talking About My Abortion”)

Chief Justice John Roberts condemned Schumer’s comments, accusing him of “dangerous” rhetoric. “Justices know that criticism comes with the territory, but threatening statements of this sort from the highest levels of government are not only inappropriate, they are dangerous,” Roberts said in a statement. (Video Below)

Schumer on Thursday, walked back his remarks on the Senate floor, saying: “Of course, I didn’t intend to suggest anything other than political and public opinion consequences for the Supreme Court. And it is a gross distortion to imply otherwise. I’m from Brooklyn, we speak in strong language. I shouldn’t have used the words I did, but in no way was I making a threat. I never, never would do such a thing.”

“You know what, you’re so freakin' obsessed with what I decide to do with my body, maybe you shouldn’t even want to have sex with me, or you, or any woman!”pic.twitter.com/n0W2TiQrHG