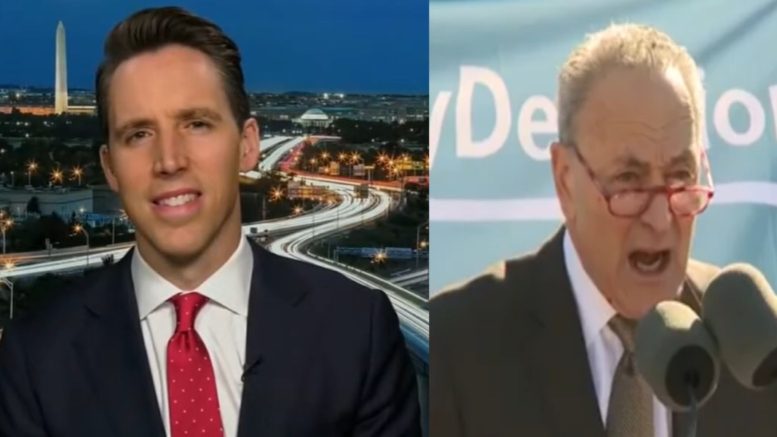 Senator Josh Hawley (R-MO) introduced a motion to censure Senate Minority Leader Chuck Schumer over apparent threats he had made against Supreme Court Justices Brett Kavanaugh and Neil Gorsuch on Wednesday, outside of the Supreme Court. On Thursday, Hawley posted a list of Senators who are co-sponsoring his motion to censure the New York Democrat.

While speaking at the rally hosted by the Center for Reproductive Rights, Schumer warned Justices Gorsuch & Kavanaugh they will “pay the price” depending on how they will side on June Medical Services LLC v. Russo, which is the first “major” abortion case since President Trump’s court picks have been on the bench,  according to Fox News.

The New York Democrat also said the pair “won’t know what hit you” if they side in a way that hurts abortion access in a case before the court Wednesday.

Senator Hawley called Schumer’s remarks “disgusting, shameful and frankly, WEAK” before announcing his plan to introduce a motion to censure.

“Now @chuckschumer is threatening Supreme Court Justices personally, to the point of implying their physical safety is endangered. Disgusting, shameful, and frankly, WEAK,” Hawley wrote on Twitter Wednesday. “I would call on Schumer to apologize, but we all know he has no shame. So tomorrow I will introduce a motion to censure Schumer for his pathetic attempt at intimidation of #SupremeCourt.” (Continued Below)

On Thursday, Senator Hawley posted a list of Senators who are co-sponsoring his motion to censure Schumer.

Hawley’s censure resolution, which has 14 Republican co-sponsors, invoked the shooting of House Minority Whip Steve Scalise, R-Louisiana, in 2017 and Schumer’s comments about the dangers of violent rhetoric at the time of that incident, reported Kansas City.

“Senator Schumer has acknowledged that threatening statements can increase the dangers of violence against government officials when he stated on June 15, 2017, following the attempted murder of several elected Members of Congress, ‘We would all be wise to reflect on the importance of civility in our [N]ation’s politics’ and that ‘the level of nastiness, vitriol, and hate that has seeped into our politics must be excised,’” the resolution states.

Schumer’s comments drew criticism from Republicans, including President Donald Trump, who said on Wednesday that the Senate Minority Leader should face immediate repercussions.

“This is a direct & dangerous threat to the U.S. Supreme Court by Schumer. If a Republican did this, he or she would be arrested, or impeached. Serious action MUST be taken NOW!” the president had tweeted, sharing a video clip of Schumer’s remarks, which was posted by Rep. Jim Jordan (R-OH). (Continued Below)

After facing much backlash, the Senate Minority Leader said on the Senate floor Thursday: “I’m from Brooklyn, we speak in strong language. I shouldn’t have used the words I did.”

“Of course, I didn’t intend to suggest anything other than political and public opinion consequences for the Supreme Court. And it is a gross distortion to imply otherwise. I’m from Brooklyn, we speak in strong language. I shouldn’t have used the words I did, but in no way was I making a threat. I never, never would do such a thing,” Schumer insisted.

I would call on Schumer to apologize, but we all know he has no shame. So tomorrow I will introduce a motion to censure Schumer for his pathetic attempt at intimidation of #SupremeCourt

(Related: McConnell Blasts Schumer’s Effort To ‘Bully’ Kavanaugh & Gorsuch: “There Is Nothing to Call This But A Threat”)