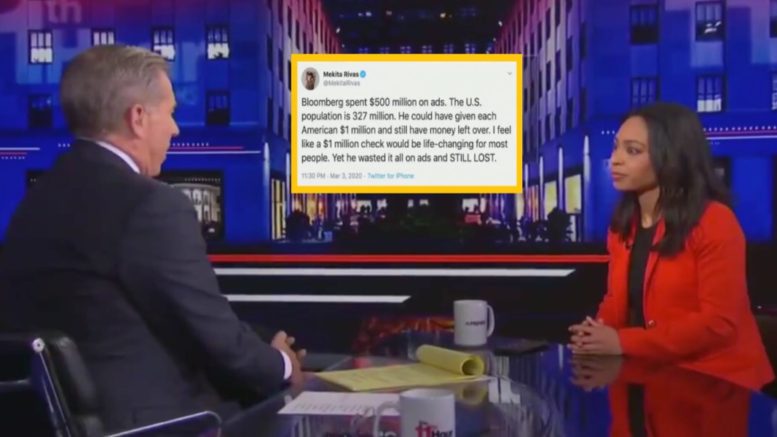 Both Williams and Gay appeared astonished over a Twitter user’s post about Mike Bloomberg’s campaign spending, however, the Twitter user had gotten the math completely wrong, and neither Williams nor Gay seemed to notice.

The Twitter user had posted: “Bloomberg spent $500 million on ads. The U.S. population is 327 million. He could have given each American $1 million and still have money left over, I feel like a $1 million check would be life-changing for people. Yet he wasted it all on ads and STILL LOST.”

“It’s an incredible way of putting it,” Brian Williams expressed.

In reality, however, had Bloomberg divvied his advertising dollars among all Americans, $1.53 per person would be more like it. (Continued Below)

MSNBC’s Brian Williams reads a tweet: "Bloomberg spent $500 million on ads. U.S. Population, 327 million. He could have given each American $1 million"

“Turns out Mara and I got the same grades at math. I’m speaking of the tweet we both misinterpreted. He could give each American $1. Again, I didn’t have it in high school. I don’t have it tonight. I stand corrected. Sorry about that. The tweet is wrong,” Williams told viewers later in the show. “Garbage in, garbage out,” Fox News reported.

“The 11th Hour” also pointed out the mistake on social media.

“Tonight on the air we quoted a tweet that relied on bad math. We corrected the error after the next commercial break and have removed it from later editions of tonight’s program. We apologize for the error,” the Twitter account for Williams’ show wrote afterward.

Tonight on the air we quoted a tweet that relied on bad math. We corrected the error after the next commercial break and have removed it from later editions of tonight’s program. We apologize for the error.

Critics took to Twitter to mock Williams and Gay:

The truly disturbing aspect of this mind-boggling miscalculation is THIS IS WHAT DEMOCRATS DO. They are so cavalier with other people’s money, they confuse $1M with $1.53. For them when you’re spending money you didn’t earn, it just doesn’t matter. It’s that sad and that simple. https://t.co/pKau1usaHV

They didn’t just say it, Brian Williams called to go whole screen with it. “It’s an incredible way of putting it.”
An incredible way that’s also total BS. https://t.co/k8SFA3dBCn

"enough to give each American a $1M check"

This wasn't just a slip
It passed muster w/ producers & they even made a graphic#DamUDum pic.twitter.com/bPPMNmDFQn

This little segment should serve as a reminder that Brian Williams is still doing the television.

I thought they were going to mock the stupidity of the tweet, but then she says it's true and I can't believe it's real.
pic.twitter.com/F47R7hrp2N

@BWilliams @MaraGay @MSNBC how do you 2 not realize that five hundred million dollars for 327 million Americans is about $1.50? How bad are you both it math? How dumb is your producer? pic.twitter.com/3wjHMQRoZw

Brian Williams and a member of the NYT Editorial Board thought that the $500 million Bloomberg spent on ads could have been used to give "each American $1 million" instead.

This would be true…if America's population was 500.

These are the people telling you how to vote. https://t.co/0yoCcdpsUd

These are our brightest and smartest pic.twitter.com/LjErwd9Lom