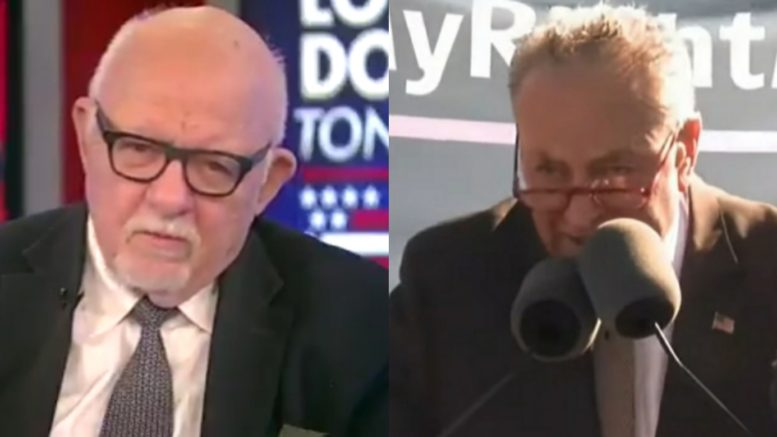 On Wednseday, Republican strategist Ed Rollins weighed in on Senator Chuck Schumer threatening Supreme Court Justices Neil Gorsuch and Brett Kavanaugh at an anti-abortion rally, where he said the two Justices will “pay the price” and “won’t know what hit them” depending on how they side on an abortion-related case.

Rollins specifically targeted Schumer’s excuse for making such threats, which the Senate Minority Leader blamed on “strong language” he’s accustomed to using from growing up in Brooklyn.

Related Article: Sen. Hawley Posts A List Of Senators Who Are Co-Sponsoring His Motion To Censure Schumer

“I don’t care about Brooklyn. I care about the United States Senate,” Rollins said.

He continued, “He’s the #1 Democrat in the Senate and he threatened two members of the Supreme Court and warned them that they didn’t write on the abortion issue, the wrath of God was gonna come down on them.”

Sen. Schumer is facing the possibility of being censured as Senator Josh Hawley (R-MO) has planned to file a motion that is now co-sponsored by a long list of other senators.

You can see the full list by CLICKING HERE.

Watch this every day to remind yourself who we are dealing with. Then donate to every Republican candidate. Then play it for every friend who is a Democrat. If they support this directed violence against named Justices, cut them from your lives. Forever. pic.twitter.com/83jOtn5txp