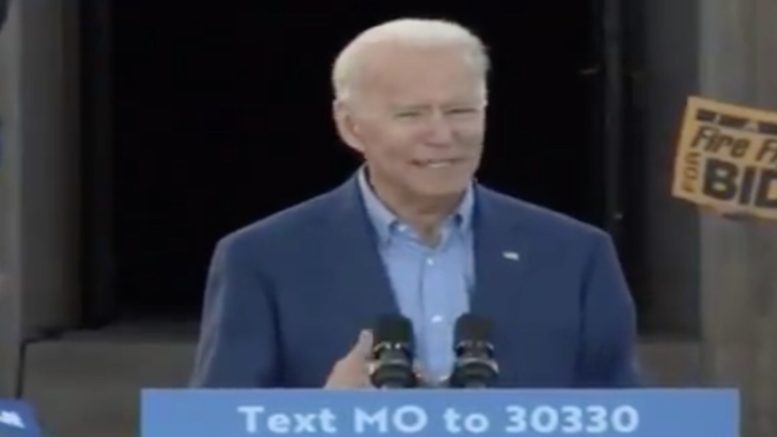 While speaking at a rally in St. Louis, Missouri on Saturday, former Vice President Joe Biden made yet around round of gaffes while talking to voters.

“You want a nominee that will bring this party together, who’ll run a progressive, positive campaign and turn– turn this primary from a campaign that’s about negative attacks into what we’re for,” Biden said.

Joe Biden continued: “Because we cannot get re-elected, we cannot win this re-election, excuse me– we can only re-elect Donald Trump– if in fact, we get engaged in the circling firing squad.”

President Trump responded to Biden’s gaffe by expressing on Twitter Saturday night, “I agree with Joe!”

In another part of Biden’s speech, he told the crowd: “We’re gonna unite this party and unite this country. So, folks, you wanna nominate a Democrat, a life long Democrat, a proud Democrat, an ‘Obiden-Bama’ Democrat, join us.”

Biden also said to rallygoers: “Look, we have to restore America’s leadership on the world stage– no longer embracing autocrats and dictators like Putin and Come-Jung– Kim Jung Un.” Video Below

Watch- Joe Biden: “We cannot win this re-election, excuse me– we can only re-elect Donald Trump…”.

Joe Biden says this stuff while using a teleprompter pic.twitter.com/RPny7e3VWt

Joe Biden’s decline continues as he says that he is an ‘Obiden-Bama’ Democrat pic.twitter.com/4wsXzGfrX4

We leave you with a few other gaffes Joe Biden had also made:

Biden struggled through 7 minutes while using a teleprompter

Trump talks for approximately an hour or so at his rallies without needing to use a teleprompter https://t.co/M1CPc8mqy0

(Related: Joe Biden Confuses His Wife With His Sister During His Super Tuesday Speech In Los Angeles)