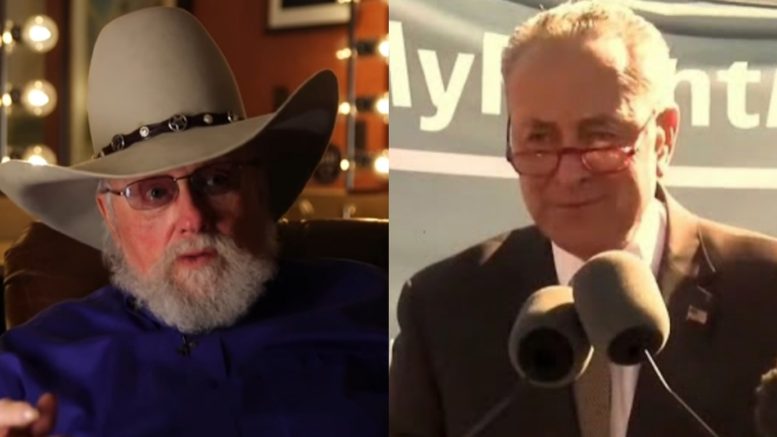 In his latest “Soap Box”, singer and songwriter Charlie Daniels targeted Senator Chuck Schumer over recent threats he made while speaking at a pro-abortion rally. The Senate Majority Leader suggested in his speech that Supreme Court Justices Neil Gorsuch and Brett Kavanaugh will “pay the price” and “won’t know what hit them” depending on how they side on an abortion-related case.

Members of the pro-abortion crowd cheered when the Schumer exclaimed: “I want to tell you, Justice Kavanaugh and Justice Gorsuch, you have unleashed a whirlwind, and you will pay the price!”

After facing backlash, Sen. Schumer attempted to clarify his remarks by claiming that they were directed at President Trump and Senate Republicans, and blamed his rhetoric on the “strong language” he’s accustomed to using from growing up in Brooklyn.

Charlie Daniels, however, isn’t buying Schumer’s excuse for making the threats, and he declared that the Senate Majority Leader “can’t wiggle or spin” his way out this time.

“If an ordinary American citizen stood in front of a highly charged partisan crowd on the steps of the Supreme Court building and screamed out these words, they would be charged with threatening, by name, Supreme Court Justices and probably hauled off for questioning by the Secret Service.

“Well, Charles Schumer – United States Senator from the state of New York and Senate Minority Leader – did exactly that, making specific threats, along with other inflammatory remarks against Justices of the highest court in the land.” Continued Below

“And then, after the entire nation heard the threats, and the heat for his remarks started coming down, he tried to lie his way out of it, claiming that he was talking about Republicans who confirmed the Justices.

“No, this is not the act of a rational patriot, rather the act of a hate crazed loose cannon who desperately wants to take back control of the Senate in the coming election and is pandering to any pressure group he thinks can help him.”

Towards the end of his blog post, Mr. Daniels added to Sen. Schumer’s “whirlwind” statement by quoting a Bible verse.

Daniels said, “Mr. Schumer, let me finish your quote for you and apply it, not to the Supreme Court, but to the nation. ‘For they have sown the wind and they shall reap the whirlwind.’ – Hosea 8:7 God’s Holy Word.”

In ending, here is Geraldo Rivera’s reaction to Schumer’s remarks: