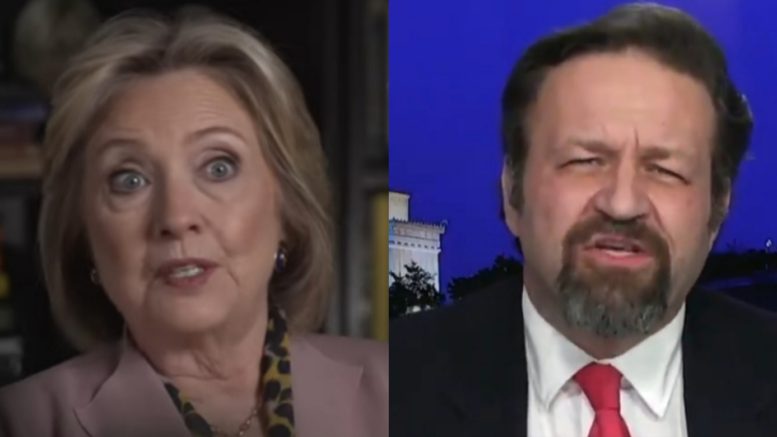 Former member of the Trump Administration, Sebastian Gorka, responded to the latest claim made by Hillary Clinton, when she said, “I am the most investigated innocent person in America.”

Clinton reportedly made the remarks while filming a new Hulu documentary about her life.

While filling in on Lou Dobbs Tonight, Gregg Jarrett brought forth Hillary’s latest remarks and asked Mr. Gorka what he thought about them.

“So let me tell you what Hillary Clinton is,” Gorka began. “Hillary Clinton is the most corrupt politician in American history, who’s committed scores of felonies, who has never ever faced a day in court.

He continued, “This is a woman who — thanks to James Comey, we know it– put at least 108 top secret emails on an unclassified server. Every single one of those is a felony.”

Gorka went on to say that it is really President Donald Trump who is the most investigated innocent person in American history. Video Below

“And, you know who is the most innocent politician to be investigated is?” Gorka asked. “My old boss, Donald Trump.”

“$40 million dollars spent, 20 months of the Mueller persecution, 40 FBI agents, hundreds of subpoenas, hundreds of interviews — if somebody’s innocent,” Gorka said. “They couldn’t find one, one crime. The impeachment articles weren’t even crimes.”

“So maybe Hillary was thinking about President Trump when she said ‘most innocent person to be investigated so much,” he proclaimed. Video Below