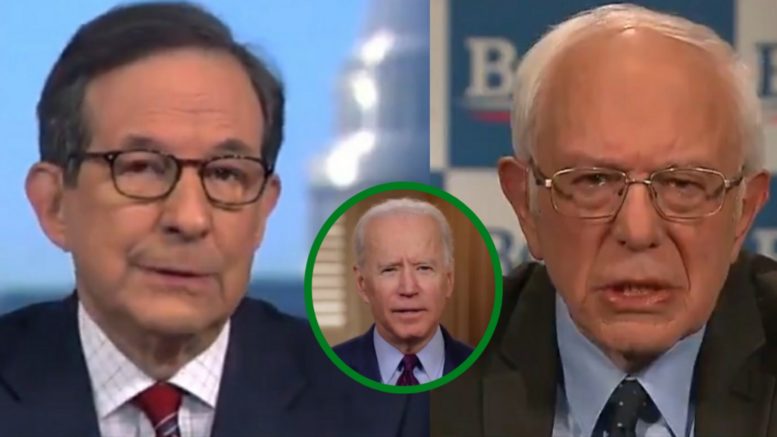 While appearing for a rare interview with Fox News host Chris Wallace on Sunday, Democrat presidential candidate Bernie Sanders responded to recent taunts made by Joe Biden that were directed at him ahead of Tuesday’s primary in Michigan.

Many political analysts view Michigan as a make or break state for Bernie, who did poorly on Super Tuesday in states with white working class voters.

During his Thursday interview with MSNBC, Biden taunted Bernie’s Super Tuesday performance among other groups aside from the working class.

“It’s ridiculous,” Biden said. “Bernie, you got beaten by overwhelming support I had from the African American community, Bernie. You’ve gotten beaten because of suburban women, Bernie.”

After playing the clip of Biden making the remarks, Chris Wallace asked, “If you were to lose in the first industrial Midwest state to vote, Michigan, on Tuesday, how serious is that, how damaging and would you consider dropping out?”

“Well, no, I would not consider dropping out,” Bernie replied. Video Below

Related Article: Myrtle Beach Bernie Crowd Cheers As Mayor Asks: “How Does It Feel To Be…A Bunch Of Socialists?

Mr. Sanders went on to mention that he had been asked that same type of question by the media in other states, including Iowa and New Hampshire, but he continued to push forward despite the critics.

“We won California, the largest state in this country,” Bernie proclaimed. “We are winning over Latino voters big time. We are winning among young people.” Video Below

Bernie Sanders says on FOX News Sunday he will not drop out of the 2020 presidential race even if he loses Michigan, the first industrial Midwest state to vote. #FNS pic.twitter.com/cj1ILIcfbu

Here is another section of the interview where Bernie responded to other shots taken by Biden: