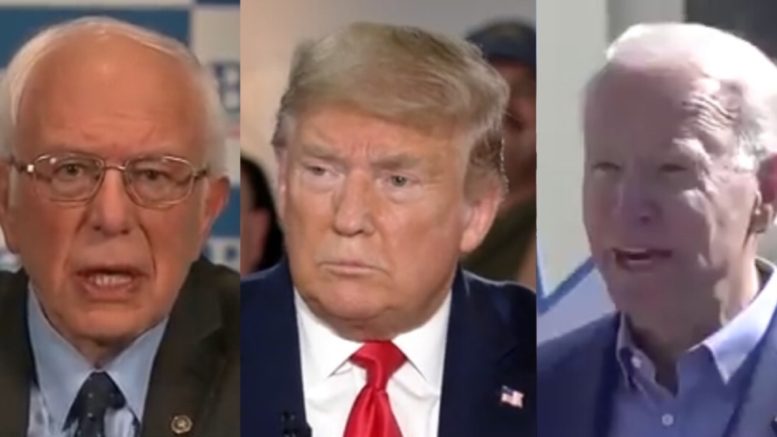 Sanders, during the interview, had pointed out some of Joe Biden’s voting record on certain bills, but the CNN host argued that the former Vice President led the efforts to the Auto Industry Bailout, saying that it “saved jobs in Michigan”.

“Well, it wasn’t just the vice president,” Senator Bernie Sanders (I-VT) insisted. “He was vice president. Barrack Obama was the president, members of Congress worked very hard on that bailout as well.”

“But the bottom line here is, we have had– you know if you’re taking on Trump and defeating Trump, and Joe understands, and I understand, that we have got to do everything possible to defeat Trump. I’ll support Joe if he wins. He’ll support me if I win,” he said.

“But going into states like Michigan, going into Pennslyvania, going into Winsconsin, key battleground states– these are all states that have been devastated by these terrible trade agreements,” Sanders claimed. “And I fear very much, you know if Joe is the candidate, believe me, Trump will and has already talked about Joe’s record on trade.”

“I believe that we are the strongest campaign to defeat Donald Trump,” Sanders alleged. “A, because we have a grassroots movement that is unparalleled. B, because we have a voting record that speaks to the needs of working families.” (Continued Below)

(Related: Bernie Responds To Biden’s Taunts, Assures He Won’t Drop Out If Losing In Michigan On Tuesday)

Jake Tapper asked Sanders: “Are you saying that Joe Biden will lose Michigan and other industrial and midwest states to President Trump if he is the nominee?”

“No, I’m not saying that,” Sanders replied. “I’ve been asked that a million times, and I believe Joe can beat Trump. If Joe is the candidate, I’ll do everything I can to make sure that he does.” [Emphasis added]. (Video Below)

“But I think, just looking at the facts if you’re going into the industrial base of the United States of America, the heartland of America, and you voted for agreements that have devastated communities, like Flint, Detroit, it is hard to make the case when Trump has made trade such an important part of his agenda,” Sanders acknowledged.

“It will be hard I believe, not to say that he can’t do it, but it will be hard for Joe to defend a record on trade when it has had such a negative impact on the midwest,” he then admitted.

Sen. Bernie Sanders: "I believe Joe can beat Trump, and if Joe is the candidate I'll do everything I can to make sure that he does." pic.twitter.com/sGPFDA5muL

(Related: Bernie Responds To Biden’s Taunts, Assures He Won’t Drop Out If Losing In Michigan On Tuesday)