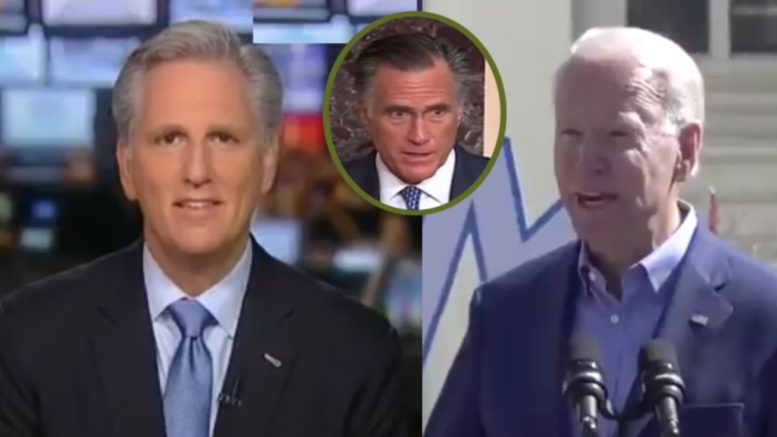 Bartiromo told Rep. McCarthy that New York Governor Andrew Cuomo had said “President Trump is afraid of Joe Biden”, adding: “You called it on this program, you said that the Democrats are clearing the decks for Biden and they’re colluding against Bernie again. They are all getting behind Joe Biden right now. What are your prospects going into [the] 2020 election?”

“Remember what they did to Bernie Sanders four years ago? The night before the convention, the chair of the Democratic Party had to resign because they found out they were cheating,” the House minority leader noted.

“Nancy Pelosi, the Speaker of the House, held the papers– impeachment, not to go to the Senate so the Senators could not campaign to give an advantage to Joe Biden. They got [Amy] Klobuchar to back out and [Pete] Buttigieg to endorse beforehand,” he continued.

“But the one thing they have to understand, and looking back as a Republican, nominating Joe Biden, it’s the same thing as Republicans nominating Mitt Romney. It may make the establishment feel good, but you have no chance of winning,” Rep. McCarthy expressed. [Emphasis added].

He also noted of Joe Biden and his son Hunter: “Any elected official that uses their office or has their children who use[s] their office to get economic gain, where you’re getting $50K a month, how many Americans don’t make that in a year? And you have no experience whatsoever. The only reason you have that job is because of your father, and your father withholds money to a country to change the investigation of the people that hired you?” (Continued Below)

“The Democrats should be the first person investigating this,” McCarthy recommended. “All they’ve done with their majority is investigate. But the only place that they wouldn’t investigate is Joe Biden, because they care about politics, instead of the rule of law.”

Bartiromo pointed out: “We’ve been waiting on Lindsey Graham to call somebody down to subpoena Hunter Biden, subpoena somebody around this sewer. We haven’t seen it yet. Is this gonna be investigated or not?”

“You’ve got Senator Johnson out there asking for a subpoena and rightfully so. And this shouldn’t be about politics. This should be about the rule of law and that’s exactly the way it should be carried out. I would like to see Democrats care about this too and vote for this as well,” McCarthy replied. (Video Below)

Last Sunday, Senator Johnson sent a letter to members of his committee saying that it is his “intention to schedule a business meeting to consider a committee subpoena” of a former consultant for Blue Star Strategies, which Johnson noted worked as a U.S. representative for Burisma.

(Related: Biden To His Missouri Supporters: “We Can Not Win This Re-election …We Can Only Re-elect Donald Trump…”)