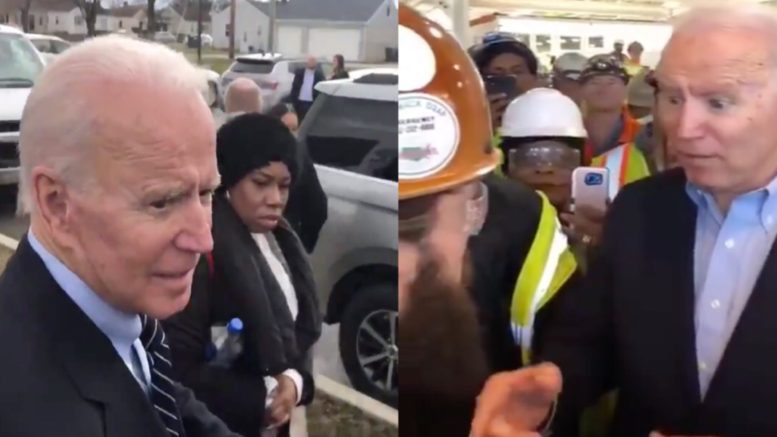 Former Vice President Joe Biden didn’t like something that an autoworker confronted him with pertaining to guns in Detroit, Michigan on Tuesday and fired back by cussing at the autoworker.

This comes after the Democratic presidential candidate accepted Robert Francis “Beto” O’Rourke’s endorsement last week in Dallas and told the former Texas congressman that he will be involved in federal gun control efforts if Biden takes office.

One of the autoworkers told Joe Biden that he is “actively trying to amend your second amendment right and take away our guns”.

“Wait! Wait! Wait! We’ll take your AR-14’s away!” Biden said, to which the autoworker told Biden “This is not okay”.

Biden then told the man, “Don’t try me, pal. Do you want to go outside?” (Continued Below)

The autoworker told Biden, “You’re working for me, man!”

“I’m not working [for you]– come here, brave man. Don’t be such a horses ass,” Biden declared.

CBS News’ 2020 campaign reporter following Joe Biden, Bo Erickson, asked Biden later about him swearing at the Union worker. Erickson reported that Biden pivoted and said he is ‘surprised’ [Bernie] Sanders is in alignment with the Trump campaign on bashing him. Video Below

Biden’s confrontation with the Union worker:

Bo Erickson confronts Biden about swearing at the Union worker:

Asked about him swearing at this voter, Biden pivots and says he is “surprised” Sanders is in alignment with the Trump campaign on bashing him: pic.twitter.com/9zetQZzO2m