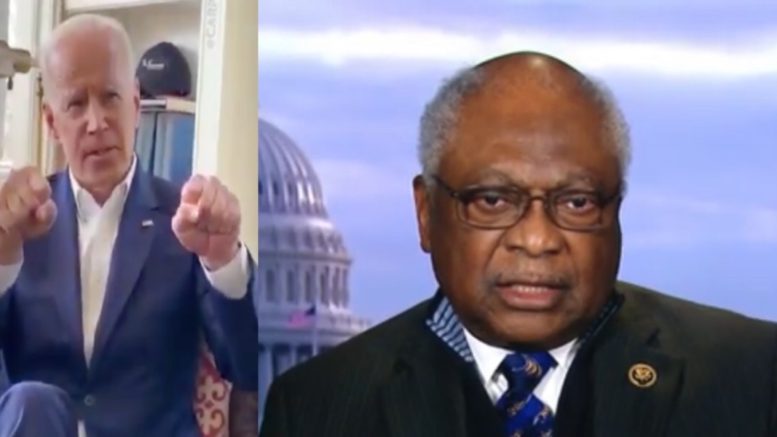 House Majority Whip Rep. Jim Clyburn (D-SC) called for the Democratic National Committee (DNC) to cancel the remaining 2020 primaries and debates if Joe Biden performed strongly on Tuesday night in order to protect him from saying something that he “cannot overcome,” the Daily Wire reported.

Clyburn had publicly endorsed the former vice president days before the South Carolina primaries, which was a turning point for the Biden campaign after he performed poorly in the previous primaries.

Rep. Clyburn told NPR in an interview Tuesday: “I think when the night is over. Joe Biden will be the prohibitive favorite to win the Democratic nomination, and quite frankly, if the night ends the way it has begun, I think it is time for us to shut this primary down, it is time for us to cancel the rest of these debates– because you don’t do anything but get yourself in trouble if you continue in this contest when it’s obvious that the numbers will not shake out for you.”

Clyburn later added that as the process continues to drag on that Biden will get “himself into trouble” and hurt himself for the general election.

The House Majority Whip’s comments come after the former vice president snapped on a Michigan autoworker on Tuesday, threatening the man, and telling him that he’s “full of sh*t!” when pressed on gun control.

Biden also told the man that he was going to “go out and slap you in the face.” (Continued Below)

“You’re working for me, man,” the autoworker had told Biden.

“I’m not working for you,” Biden shot back. “Don’t be such a horse’s ass.”(Video Below)

Rep. Clyburn says Democrats have to "shut this primary down" and keep Biden from getting himself "in trouble" in debates

But when your frontrunner is Joe Biden, who can blame them 🤣 pic.twitter.com/79NdwXNLiM

NPR journalist Miles Park tweeted some of Rep. Clyburn’s remarks from the interview:

He says prolonging the primary process only makes it more likely that the favorite, Biden in his eyes, "gets himself into trouble" and hurts himself for the general election

"Let's shut this puppy down and… worry about November. This thing is decided."