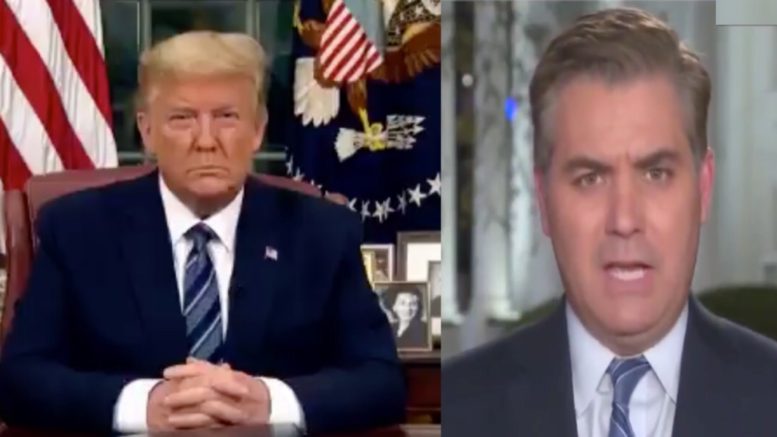 Wednesday night, President Trump addressed the nation about the next steps the U.S. government is taking to try to stop the further spread of the coronavirus.

CNN’s chief White House correspondent, Jim Acosta, however, criticized the president for labeling COVID-19, which is commonly referred to as the coronavirus or the Wuhan virus, as a “foreign” disease. Acosta claimed it will come across as “xenophobia” to a lot of Americans.

“At one point during this address, the president referred to the Coronavirus as a quote, ‘foreign virus.’ That, I think, was interesting because I was talking to sources earlier this evening, one of the points that the president wanted to make tonight, wanted to get across to Americans is that this virus did not start here, but that they are dealing with it,” Jim Acosta told host Chris Cuomo.

“Now why the president would go as far as to describe it as a foreign virus, that is something we’ll also be asking questions about. But it should be pointed out that Stephen Miller, who is an immigration hardliner, who advises the president, is one of the top domestic policy advisers and speechwriters, was a driving force in writing this speech,” he continued.

“And I think it is going to come across to a lot of Americans as smacking of xenophobia,” Acosta added.

Democrats and some members of the mainstream media have recently accused Republicans of racism and xenophobia whenever they have referred to COVID-19 as the “Wuhan virus” or the “Chinese virus.” (Continued Below)

(Related: Amid Coronavirus, Democrats Bring ‘NO BAN Act’ To House Floor; WH Threatens To Veto If It Reaches Trump’s Desk)

Most notably, Jim Acosta himself had tweeted in January: “CNN International: Authorities in Beijing have canceled all large-scale Chinese New Year celebrations in an effort to contain the growing spread of Wuhan Coronavirus.”

Donald Trump Jr. retweeted Acosta’s tweet asking, “I’m pretty sure CNN told me referring to it as Wuhan Coronavirus was racist???” (Video Below)

I’m pretty sure CNN told me referring to it as Wuhan Coronavirus was racist??? https://t.co/ppu77EuYv0

President Trump’s address to the nation:

We leave you with a clip of the media:

Democrats & the Fake News Media are politicizing the coronavirus.

They are accusing President Trump of racism and xenophobia for stating the facts.

This is a foreign virus that originated in Wuhan, China. Just a few weeks ago, Democrats and the media were all saying it! pic.twitter.com/nb9elJvN6H

(Related: Acosta Says There’s ‘No Evidence’ Obama Tried Influencing The 2016 Election, Bongino Fires Back: ‘Is This A Joke?’)