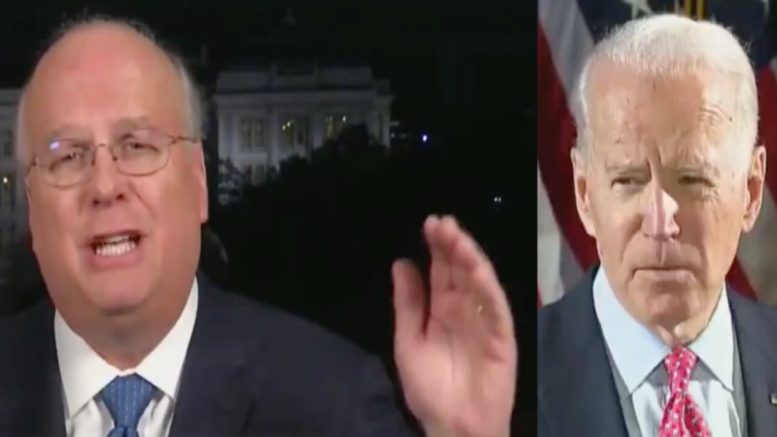 Former George W. Bush adviser, Karl Rove, ripped former Vice President Joe Biden on Thursday during an airing of Fox News’ “Hannity”, for sending out an email soliciting donations for his presidential campaign while warning Americans about the coronavirus.

Sean Hannity had pointed out that Biden joined his fellow Democrats in attacking the president during the beginning of the coronavirus outbreak after President Trump ordered strict border security measures. The Fox News host called Biden “sick”.

Karl Rove had written down parts of Joe Biden’s email on his whiteboard and reacted in disbelief to Joe Biden trying to raise money off of the coronavirus.

“Here’s the front page of the e-mailer, sent out about 7:40 p.m. tonight,” Rove said. “‘Here’s a speech I gave this afternoon. This is a long email, but I hope you read it all the way through and forward it to family and friends’.”

“The final page has a “Donate to Joe Biden” button on it,” Rove pointed out — “He’s raising money off of this. Here’s what it says at the end: ‘This isn’t the time to be complacent. If you are ready to fight for the soul of this nation, you can start by donating to elect Joe Biden by clicking the button below. Donate to Joe Biden.’

“The man is raising money off of the coronavirus challenge facing our country,” Rove said. “Does he have no shame? Is there no decency that says, you know what? There are some moments when we shouldn’t be taking things and use them for crass political purposes and money. He’s using it for prospecting!” (Continued Below)

“30 minutes after that, the Democratic Senatorial campaign committee sent out one saying, ‘Breaking! Senate GOP blocks emergency paid sick leave bill from moving forward.’ It just arrived this afternoon. It was passed by the House this afternoon, arrived in the evening the Senate. And at 8:10 PM ET, they’re sending out a prospect email piece asking people to let them know how they feel about it and to support Democrats for the United States Senate,” he said.

“Have these people no sense of decency? Can we not step away from this for a minute and politicize everything coming down the line, or is everything being used for fundraising?” Rove wondered. (Video Below)

Joe Biden is raising money off the coronavirus.

"Does he have no shame? Have these people no sense of decency?" pic.twitter.com/GRW7lqxSsW

(Related: Pelosi On Coronavirus Legislation Negotiations: “I’m Not Sticking Around Because [Repubs] Don’t Want To Agree To Language”)