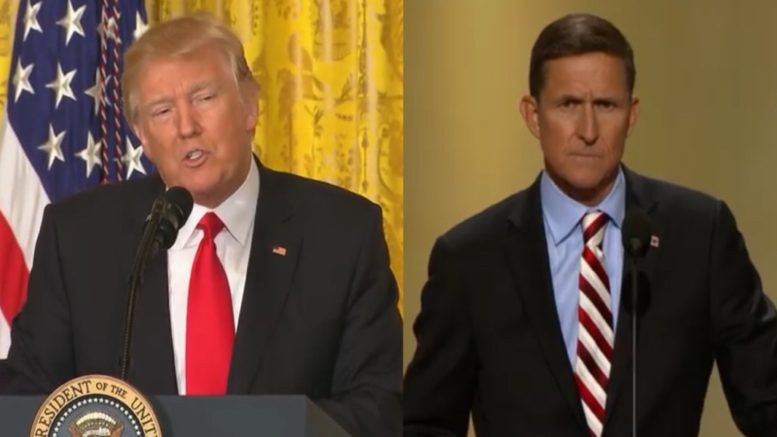 President Donald Trump took to Twitter on Sunday to announce that he is “strongly considering” a full pardon for his former national security adviser General Michael Flynn.

“So now it is reported that, after destroying his life & the life of his wonderful family (and many others also), the FBI, working in conjunction with the Justice Department, has ‘lost’ the records of General Michael Flynn,” the president tweeted.

“How convenient. I am strongly considering a Full Pardon!” he announced Sunday.

So now it is reported that, after destroying his life & the life of his wonderful family (and many others also), the FBI, working in conjunction with the Justice Department, has “lost” the records of General Michael Flynn. How convenient. I am strongly considering a Full Pardon!

He was originally charged by special counsel Robert Mueller, who was tasked with investigating Russian interference in the 2016 election and any links between Trump campaign members and Russian officials. Flynn’s sentencing is currently on hold as a judge reviews his claims.

Former FBI Director James Comey admitted he took advantage of the chaos in the early days of the Trump administration when he sent special agent Peter Strzok and another FBI agent to talk to Flynn, reported Washington Examiner. (Continued Below)

Flynn is in the process of trying to withdraw his guilty please, claiming that he’s the victim of misconduct by prosecutors. Sidney Powell has argued “there never would’ve been a plea to begin with” if Flynn knew how much information the DOJ was hiding from him.

Flynn’s team told the U.S. District Court in Washington in January, “I am innocent of this crime.” He filed to withdraw his guilty plea after the Justice Department asked Judge Emmet Sullivan to sentence Flynn to up to six months in prison, though afterward, the department said it believed probation would also be appropriate. Flynn’s team, led by Sidney Powell, a former federal prosecutor, is now pressing for the dismissal of his case, arguing that the client was unfairly treated by the FBI, as per Washington Examiner.

Attorney General William Bar ordered a review of Flynn’s case in February by an outside prosecutor, U.S. Attorney for the Eastern District of Missouri Jeffrey Jensen.

For months, Powell has insisted that the original draft of the FBI’s notes from its interview with Flynn has gone missing. In one September 2019 filing, Powell asked the judge to help produce “the original draft of Mr. Flynn’s 302 and 1A file, and any FBI document that identifies everyone who had possession of it,” as per Washington Examiner.

“Where is the original 302?” Powell tweeted in January. “It cannot be ‘missing’.” (Video Below)

After Attorney General William Barr selected U.S. Attorney Jeffrey Jensen to review the Flynn case, Powell tweeted that Jensen “should demand the Original Flynn 302 and audit trail” because “as former FBI, he knows it’s not ‘missing’.”

“The longer this false prosecution continues, the worse DOJ & FBI look,” she said.

John Solomon obtained a copy of a letter between Mueller and Flynn’s defense team, which states that “according to an internal DOJ memo dated January 30, 2017, after the January 24 interview, the FBI advised that based on the interview the FBI did not believe Flynn was acting as an agent of Russia.” (Continued Below)

Thank you Mr. President, the persecution of @GenFlynn is an egregious injustice. @FBI fully exonerated him of all things Russia by memo of 1/30/17. #Comey hid that & lied to you to create #obstruction hoax against you from 1/14/17 meeting. Explained at https://t.co/uekQxvInlf

The #Flynn persecution is an egregious injustice and big LIE by #Mueller #Comey to manufacture #obstruction hoax against you, Sir. #FBI cleared #Flynn on 1/30/17. Comey set you up on obstruction on 2/14/17. See How to Fix Justice https://t.co/uekQxvInlf@Hillsdale
He told DIA https://t.co/b0Bg8GY94j