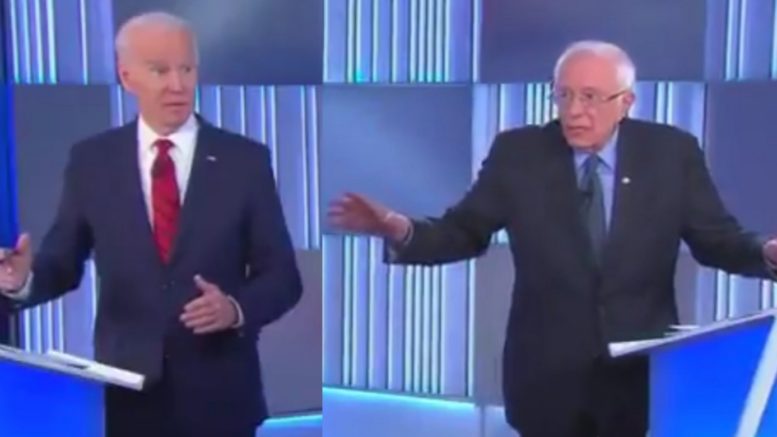 During a heated exchange at Sunday’s Democrat debate, Joe Biden claimed that Senator Bernie Sanders has nine super PACs helping his campaign and said that he could list them.

However, when Bernie challenged him to list them, Biden couldn’t and tried to quickly shrug it off.

Related Article: Joe Biden: “In The First 100 Days Of My Administration, No One Will Be Deported At All”

It all started when Sen. Sanders said to Biden, “Why don’t you join me? Why don’t you get rid of the super PAC that you have right now, which is running very ugly, negative ads about me.”

“Don’t laugh, Joe,” he added as Biden began laughing. “That’s just the truth.” Bernie then urged him to condemn super PACs as he did in the past.

Biden fired back, “You get rid of the nine super PACs you have?” Video Below

After Sen. Sanders denied having nine super PACs, Biden said, “You got nine. Want me to list them?”

With that said, Bernie swiftly challenged Biden, “Yea go ahead and list them.” But Biden couldn’t and simply replied, “Come on. Give me a break.”

Sanders responded, “I won’t give you a break on this one, Joe. You condemned super PACs. You got a super PAC. It’s running negative…” Video Below

Biden: "You have 9 super PACs, do you want me to list them?"

Biden: "Come on man, give me a break." pic.twitter.com/y1CSuMRjr4

According to New York Times, Biden’s claim that Sen. Sanders has nine super PAC’s is “exaggerated.”

As reported by NYT:

“This is exaggerated. Mr. Biden was most likely referring to “People Power for Bernie,” a coalition of nine outside advocacy groups backing Mr. Sanders’s candidacy and organizing voter mobilization efforts on his behalf. These groups were labeled “dark money” by Pete Buttigieg, the former Democratic candidate. Most of them others are 501(c)(4) organizations or social welfare nonprofits.”

Also during the debate, Biden said he didn’t “want to get this into a back and forth in terms of our politics” when the topic of coronavirus came up.

"I don't want to get this into a back and forth in terms of our politics." -Joe Biden #DemDebate pic.twitter.com/x7124dC27B

We leave you Donald Trump Jr.’s response to Joe’s remarks.

Good debate tactic if you don’t actually know what a debate is or don’t know that you’re currently in one. Insanity. https://t.co/2D7oGc4gbO