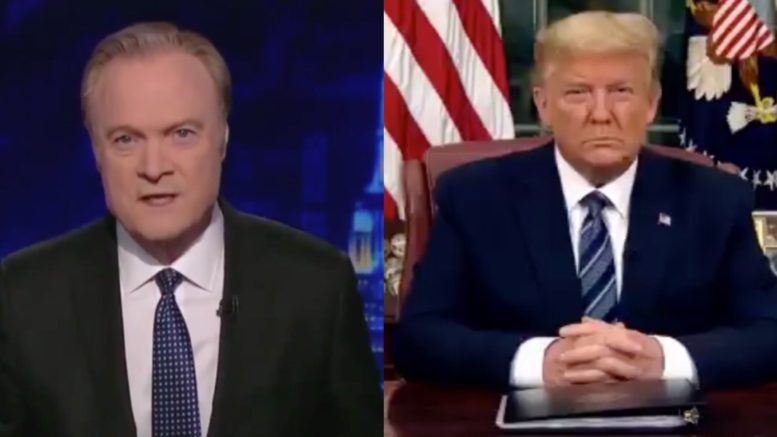 On Friday, President DonaldTrump declared a national emergency to curb the spread of the coronavirus pandemic and mobilize the entire government to fight COVID-19.

MSNBC’s Lawrence O’Donnell however, claimed last week that “more people are sick… dead and dying” because Donald Trump is president.

“The most incompetent and uninformed president in history has led the federal government into the worst emergency response to a pandemic that we have ever seen in this country. One of our guests will tell us that it’s one of the worst responses by any government in the world today,” Lawrence O’Donnell said.

“As we will discuss later in this hour, the President’s ten-minute speech from the Oval Office last night directly provoked more loss of stock market value, which is to say retirement funds, than any other speech by any other president in history. If Donald Trump had just said nothing last night, where would we be today?” he asked.

When former President Barack Obama declared a national emergency in October 2009 due to H1N1, the virus had been spreading for seven months prior. For a direct comparison to coronavirus, two months after H1N1 got its start, 43,677 people were infected and 302 people had died. H1N1 originated in Mexico, but Obama left the border open, as per American Thinker. (Continued Below)

President Trump took immediate action against travel restrictions with China in January. The policy prohibits non-U.S. citizens, other than the immediate family of U.S. citizens and permanent residents, who have traveled to China within the last two weeks from entering the U.S.

As part of the travel restrictions, Health and Human Services Secretary Alex Azar announced that any U.S. citizen returning to the U.S. who had been in Hubei Province in China in the previous 14 days would be subject to mandatory quarantine and health screening. U.S. citizens returning from mainland China outside Hubei Province were ordered to undergo health screenings and “up to 14 days of monitored self-quarantine to ensure they’ve not contracted the virus and do not pose a public health risk,” Azar said.

At the time the restrictions were announced, there were only six confirmed cases of the novel virus in the U.S. The outbreak began in Wuhan, China at the end of 2019. According to a Johns Hopkins University case tracker, 5,894 in the U.S. have been infected with the new disease, known as COVID-19. There have been 97 deaths in the U.S. currently, and 17 people have been reported to have recovered from the virus. However, 80,840 globally have recovered from the coronavirus according to the tracker. (Video Below)

(Related: Lawrence O’Donnell Tries To Persuade His Audience That Trump Is A ‘Russian Operative’: “It Is Real”)