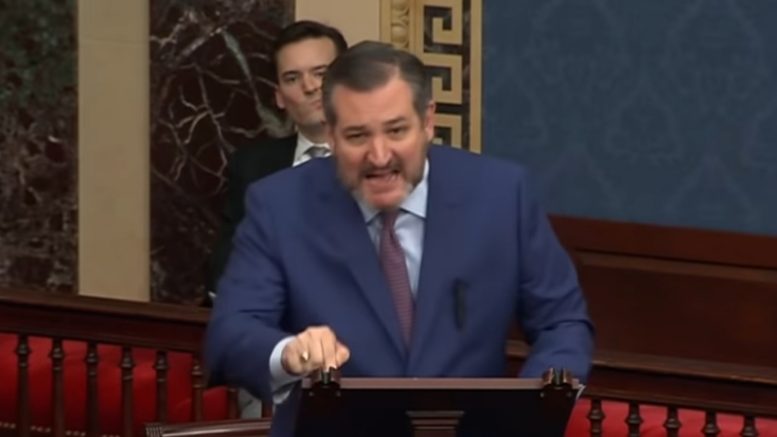 Senator Ted Cruz (R-TX) blasted Democrats’ coronavirus stimulus bill proposals on Monday as both sides were working to hash out a deal that would break the stalemate between the two parties.

Democrats blocked Republican efforts to advance the massive stimulus bill for the second day in a row on Monday afternoon on a 49-46 vote, 11 votes shy of the 60 needed to advance.

Republicans have since been slamming Democrats for trying to treat the situation as a “partisan Christmas” while millions of Americans are seeking relief from the effects of the virus.

As part of his speech, Cruz pointed to Democrats pushing to change emissions standards on airplanes, among some of the other initiatives unrelated to the coronavirus that they’re proposing in the bill.

“What the hell do the emissions standards on airplanes have to do with thousands of people dying and millions of people out of work in the coronavirus epidemic?” Cruz asked.

“Don’t treat this bill like a partisan Christmas,” he continued. “And by the way, Republicans, we’ve got things we would like to advance too — things I believe in deeply.” Video Below

Related Article: Sen. Kennedy: Right Now Americans Think “This Country Was Founded By Geniuses, But Is Being Run By… Idiots”

“You know what I’d like to do? I’d like to abolish the IRS. I’ve campaigned on that all over the country. I’m gonna continue fighting for that,” Cruz said. “But Mr. President, I’m not standing here with an amendment saying, ‘As part of this emergency relief, let’s abolish the IRS.'”

“There’s a place for that political and policy discussion,” he declared. Video Below

Sen. @tedcruz UNLOADS on Dems from the Senate floor:

"What the hell do the emissions standards on airplanes have to do with thousands of people dying and millions of people out of work in the Coronavirus epidemic?" pic.twitter.com/zXiQjJRpRA