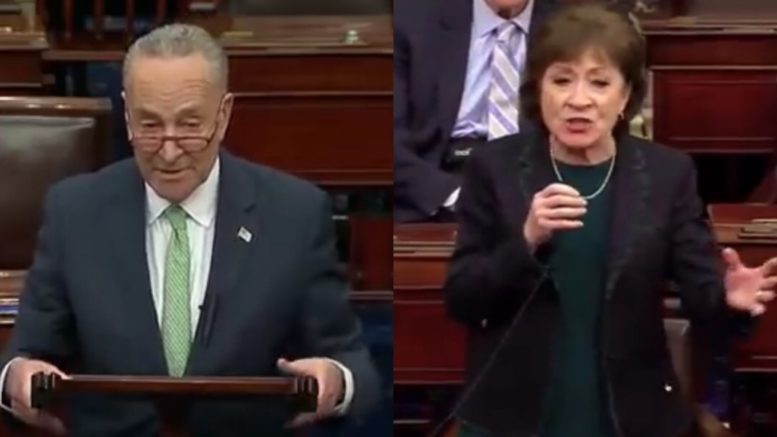 “The answer from our friends on the other side of the isle is delay, delay, delay. No sense of urgency, no hurry,” she expressed.

Senator Collins said this is the third package the lawmakers have worked on to “address and prevent the economic devastation that is being caused by this virus”.

(Related: Kennedy: Right Now Americans Think “This Country Was Founded By Geniuses, But Is Being Run By… Idiots”)

“How can that possibly be controversial? How can any of us want to see millions of Americans lose their paychecks, their health insurance, their contributions to their retirement plans,” she said of the bipartisan package put together by lawmakers. “We have a package that’s part of this broader legislation.”

“Keep in mind, every one of these task forces have been bipartisan. Do we agree on everything? Of course not, but surely, surely in this time of extreme crisis for our country, when people are getting sick, … dying from the coronavirus, … facing unemployment rates which could go as high as 20%, according to the treasury secretary. Surely, we ought to be able to pull together and work quickly to respond to the needs of the American people,” Senator Collins urged. (Video Below)

“I cannot believe the objections to proceeding to this package. Is this package perfect? No, but that’s why negotiations are still going on. But don’t we want to act quickly to provide relief to the American workers? This is disgraceful,” Senator Collins expressed. “We do not have time. Time is not on our side. Let’s get the job done for the American people.”

Democrats blocked Republican efforts to advance the massive stimulus bill for the second day in a row on Monday afternoon on a 49-46 vote. It needed 60 votes to advance.