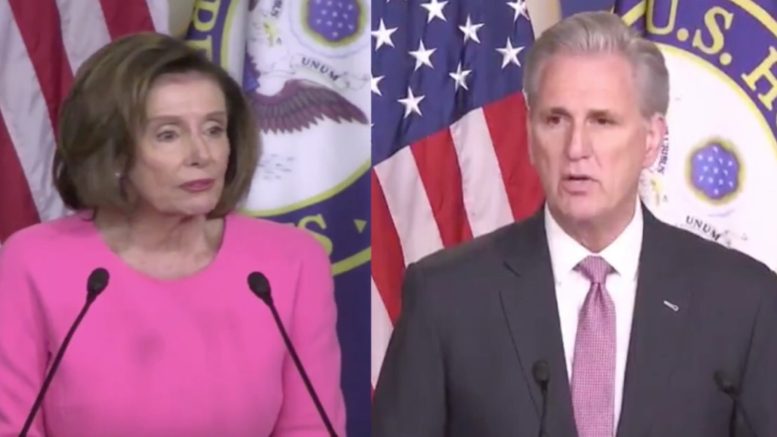 She further claimed she did “Jiu-Jitsu” to change the coronavirus legislation, but House Minority Leader Kevin McCarthy (R-CA) leveled her, saying, “That is an outright lie”.

Speaker Pelosi, however, was accused of stuffing the legislation with things that did not directly have to do with the COVID-19 pandemic, with such things as collective bargaining, the Green New Deal, student loan forgiveness, federalizing elections, (including ballot harvesting), immigration provisions, tax credits for windmills, bringing back Obama phones, pay increase for Congress, and much more.

The Senate passed a $2 trillion dollar stimulus bill late Wednesday night. The House is set to vote on the stimulus legislation Friday.

During her news conference Thursday, Pelosi told reporters, “We did jiu-jitsu on it.”

“It went from a corporate first proposal that the Republicans put forth in the Senate to a workers first– Democratic workers first legislation,” she claimed. “We have the legislation that will come to the floor tomorrow.” (Continued Below)

“We take some pride in the fact that, as I said earlier, congressional Democrats in the Senate and in the House were able to flip this over from corporate trickle-down Republican version to bubble-up worker first, family first legislation, Pelosi asserted.

House Minority Leader Kevin McCarthy leveled Pelosi during his press briefing, declaring, “A few minutes ago, the Speaker stood at this podium and claimed that House Democrats did what she called a jiu-jitsu to change the bill. That is an outright lie!”

“The only few additions were the funding of things that had nothing to do with the coronavirus. Was that worth holding it up?” GOP Leader McCarthy asked. “And more people being laid off? More people losing sleep? More people wondering if they could continue? Those are the type of games that have to stop in Washington.”

Speaker Pelosi: "The Senate passed important legislation. We're very proud of the product. We did Jiu Jitsu on it." pic.twitter.com/SMuGdgzoiu

*CORRECTION* – She added $24 million more dollars for the Kennedy Center in Washington, DC…Not a good enough reason to hold up medical and economic help for millions of Americans.

McCarthy also said: “What Democrats did was a total disgrace. History will not be kind to the days added to millions of those that are unemployed, simply because they want to change the election law, the Green New Deal, and thought it was a tremendous opportunity to change the direction and vision of this country based upon their philosophical views.”

.@GOPLeader: "What Democrats did was a total disgrace." pic.twitter.com/7lDZlrNf3X

(Related: Sen. Kennedy On Pelosi & Schumer Blocking Coronavirus Bill: “They Ought To Hide Their Heads In A Bag”)