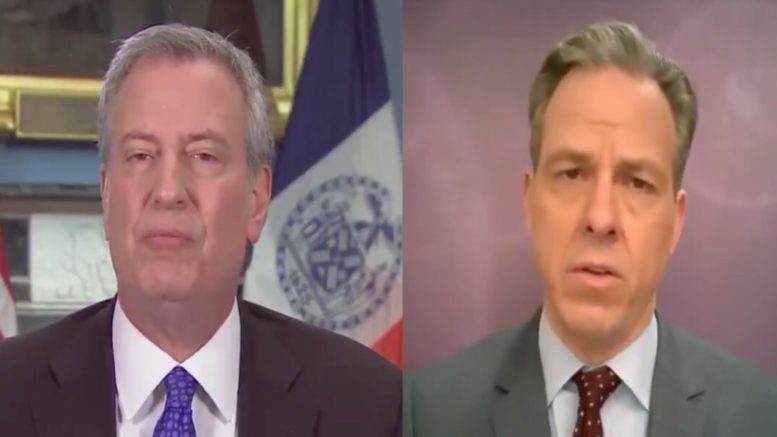 New York City Mayor Bill de Blasio spoke with CNN’s Jake Tapper on Sunday and was pressed on past comments, in which he had urged New Yorkers to “just go about your lives”, amid the coronavirus pandemic.

“Let’s talk about the response in New York City. I want you to take a listen to yourself and your message to New Yorkers, …one is from January, one is from February, and one is from early this month,” Tapper told de Blasio before playing clips of the New York City mayor’s previous remarks.

Tapper asked the New York mayor: “Is that message, at least in retrospect, in part to blame for how rapidly the virus has spread across the city?”

“We should not be focusing, in my view, on anything looking back on any level of government right now,” de Blasio deflected.

“This is just about how we save lives going forward. We all were working. Everybody was working with the information we had and trying of course to avoid panic. And at that point for all of us, trying to keep, not only protect lives but keep the economy and the livelihoods together– keep ensuring people had money to pay for food and medicine,” he said. (Continued Below)

“This was a very different world just a short time ago, but the bottom line is none of have time to look backward[s]. I’m trying to figure out how we get through to next Sunday and what we do the week after that. And that’s the only thing we should be talking about in this country,” de Blasio continued.

Tapper then asked de Blasio: “Mr. Mayor, you say you don’t think you should look backward[s], but you’ve criticized President Trump for ‘actions that are far behind the curve’. I mean, Mr. Mayor, [wasn’t] your actions in this outbreak also far, far behind in the curve?”

“Jake, I have in real-time, said this was weeks and weeks ago, as it was happening, that we were not being given the testing we needed. I think the big historical point here that will be looked back on is if this country had had the testing when we needed it, this could’ve been a very different reality. But there’s no time to go back over that. There’s only time to focus on getting through the next week and the week after that,” the New York City mayor insisted. (Video Below)

“We’ve got to focus on today, tomorrow and next week if we’re gonna get through this,” de Blasio added.

For weeks, NYC Mayor Bill de Blasio urged New Yorkers to "go about their lives." About his past comments, de Blasio now says "we should not be focusing, in my view, on anything looking back on any level of government right now" #CNNSOTU pic.twitter.com/fQYE40FPZp

(Related: Pelosi Cites Her Presence At SOTU For How She Has Communicated ‘As Best As Possible’ With Trump)