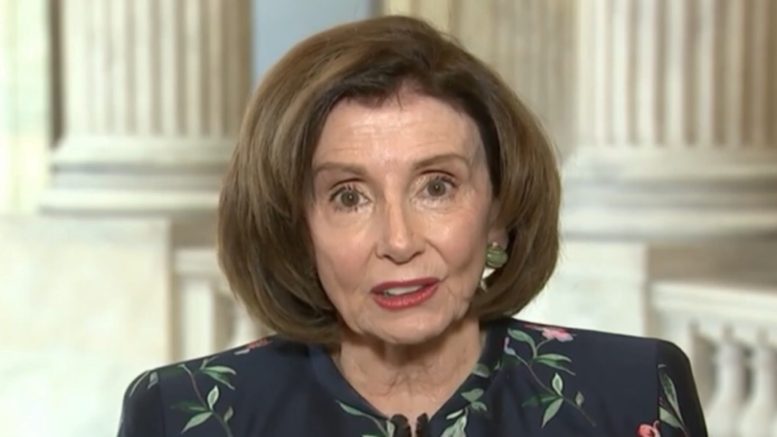 She also announced that she’s creating a House Select Committee to address the coronavirus crisis for “transparency and accountability”, adding “Others are suggesting an after-action review and that’s for after action.”

“We think it would be very important with transparency and partisanship, accountability that we proceed all together in a way that unifies our country, addresses the concerns that we have about the health and well-being of the American people, the safety of our workers, who are meeting their needs as well as the impact on our economy. … I think it’s something that should be welcomed by the Republicans and the administration as we deal with elements in our economy, as we go forward,” Pelosi said.

Asked during the interview by Andrea Mitchell: “Do you think it’s fair for Mitch McConnell to suggest impeachment slowed down the federal response?”

Pelosi responded: “No. That’s so sad. They can’t handle their jobs, I guess. Because what are they saying? We ignored it? It was self-evident. Most people knew about it, and certainly those of responsibility.”

“So I say of that, either you can’t handle your job– but don’t blame impeachment on that. Just blame it on the fact that you didn’t want to face the reality– lack denial, and that delay cost lives,” she claimed. (Continued Below)

Senate Majority Leader Mitch McConnell (R-KY) on Tuesday had argued that the Democrats’ push to impeach President Trump in January distracted the Trump administration from the threat posed by the coronavirus.

“It came up while we were tied down in the impeachment trial. And I think it diverted the attention of the government because everything every day was all about impeachment,” Senator McConnell said in an interview on “The Hugh Hewitt Show.”

Former McConnell aide John Ashbrook also pointed out on Twitter Tuesday, that the pandemic is believed to have hit the United States the same day that House Democrats marched articles of impeachment to the Senate after Pelosi held off on moving forward on impeachment for weeks. (Video Below)

Unhinged: Nancy Pelosi claims she knew about the coronavirus threat and defends her prioritizing of impeachment while President Trump put travel restrictions on China and established a coronavirus task forcehttps://t.co/O2rYjf28nF pic.twitter.com/iPlB1ojaGZ

Remember the ceremonial march of Democrat impeachment managers? That was the same day corona came to America. pic.twitter.com/qOOSpmR1rV

REMINDER: The U.S. got it’s first case of China Virus on January 15th.

What were Democrats up to?

Don’t let them fool you into thinking they took this seriously before President Trump did.

Trump Enacted a Travel Ban with China while Dems focused on Impeachment. pic.twitter.com/H2pC2zrAkH

He restricted Travel with China in January and emphasized that he was taking action against it at the State of the Union in February.

Meanwhile, Pelosi was in San Franciso’s Chinatown on February 24th telling people to “come join us”, while also alleging in a tweet that President Trump’s travel restrictions were “biased” and “bigoted”.

Pelosi, touring San Fran’s Chinatown Feb. 24: “We do want to say to people, come to Chinatown, here we are … come join us” pic.twitter.com/0FEOq9t4VM

In the coming weeks, the House will bring the NO BAN Act to the Floor to prohibit religious discrimination in our immigration system and limit the President’s ability to impose such biased and bigoted restrictions. https://t.co/prysRGMwzh

(Related: Pelosi Implies That She Holds No Responsibility For Congress’s Slow Response On COVID-19)