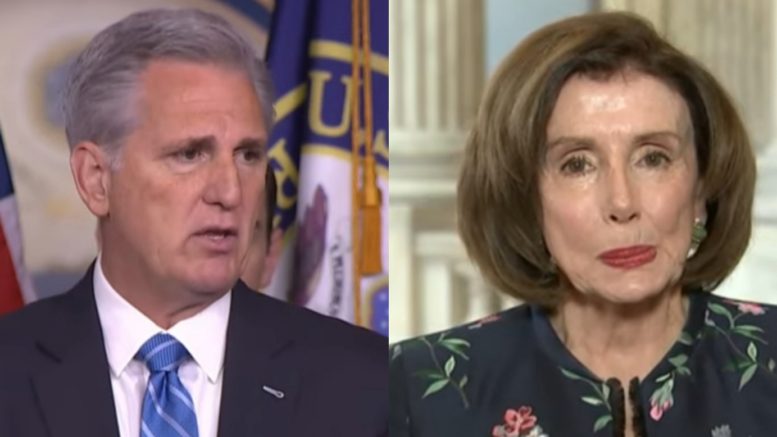 House Minority Leader Kevin McCarthy is highly concerned about House Speaker Nancy Pelosi’s decision to form a select committee to oversee the Trump Administration’s coronavirus response, primarily because of who she has chosen to lead it.

Pelosi announced in a conference call on Thursday that the committee would ensure the $2 trillion in federal relief money is “spent carefully and effectively” to fight the virus, and she said they would have subpoena power, as reported by The Washington Free Beacon.

The Speaker named House Majority Whip James Clyburn to head the committee, which Rep. McCarthy explained why he finds that so concerning.

McCarthy said in a phone interview, “I know the Speaker just talked about an oversight committee. I have a couple concerns about this.”

“Who she’s naming: Clyburn. It’s concerning to me because Congressman Clyburn is the one who thought this crisis was an opportune time to ‘restructure’ government — that’s not what we should be doing,” McCarthy said.

“We should be taking care of the health of the American public, keeping our economy strong, just as it was before, and moving forward,” he declared. See Below

Dear Democrats: a global health crisis is not an excuse for you to try to restructure America as a socialist country. pic.twitter.com/BJUt9QBmKI

McCarthy is referring to a comment made by Rep. Clyburn just weeks ago in a conference call pertaining to the coronavirus crisis, when he said, “This is a tremendous opportunity to restructure things to fit our vision.”

Clyburn also faced recent scrutiny for comparing the “dynamics” of the Republican Party to Nazi Germany.