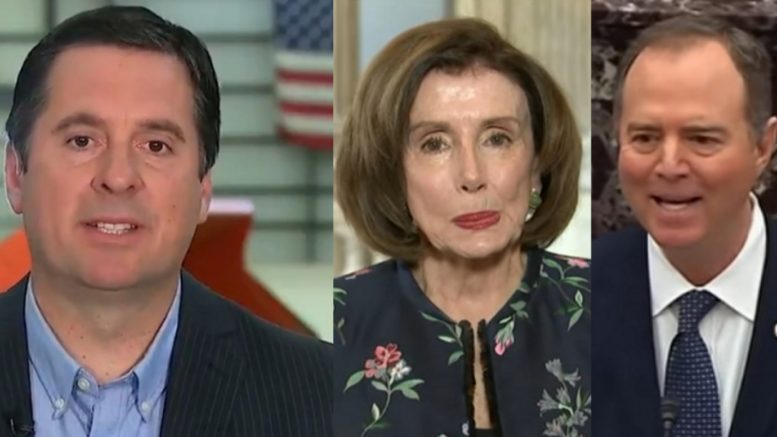 While appearing on Friday’s airing of Lou Dobbs Tonight, Congressman Devin Nunes slammed Democrats for pushing to investigate the Trump Administration’s response to the coronavirus pandemic.

Nunes specifically targeted House Speaker Nancy Pelosi, who recently announced the formation of a House select committee, and House Intel Chairman Adam Schiff, who is already pushing for an after-action review” of the crisis.

“It’s no laughing matter over what Pelosi and Schiff are trying to do. It’s more impeachment nonsense,” Nunes declared.

He continued, “Here’s the problem: We did not have any hearings as the House Intelligence Committee…we had no hearings until February 10th on the Wuhan virus, okay. So why is that?”

“It was because the Democrats were fully engaged, doing their walks across the Capitol, handing out pens, playing all of their impeachment games. That’s what was happening, totally unacceptable,” Nunes asserted. Video Below

“So we have many issues that are on the forefront. We need to figure out still, where did this virus begin? What did the Chinese know and when did they know it? We don’t need a special select committee for that,” Nunes said.

“That’s the job of the House Intelligence Committee. That’s what we should be doing. But instead, we were too busy being the House Impeachment Committee,” he proclaimed.

Then after citing the FISA court ruling and Horowitz’s latest FISA findings, Nunes said, “The last thing we need is another commission of any kind. We just need to do our job.” Video Below

Partisan Nonsense: @RepDevinNunes says the Radical Dems should have been investigating the origins of the Wuhan virus instead of pursuing their impeachment charade. #AmericaFirst #KAG2020 #Dobbs pic.twitter.com/qAyi7IWTm5