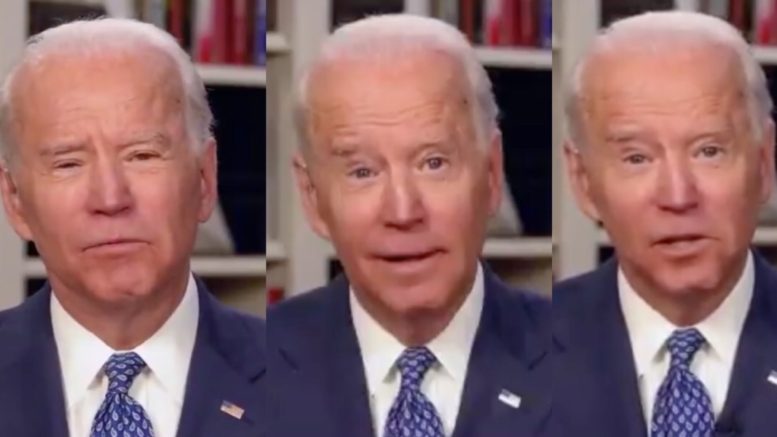 Former Vice President Joe Biden in recent days admitted that he supports President Donald Trump’s January 31 decision to ban travel from China due to the coronavirus spread, after accusing the Commander in Chief of the China travel ban “hysterical xenophobia”.

On the same day the travel ban was announced, two months ago, by Health and Human Services Secretary Alex Azar, Biden had told a crowd at a campaign rally in Iowa, “This is no time for Donald Trump’s record of hysteria and xenophobia, hysterical xenophobia, and fearmongering to lead the way, instead of science,”

Biden tweeted a similar message on February 1st: “We are in the midst of a crisis with the coronavirus. We need to lead the way with science — not Donald Trump’s record of hysteria, xenophobia, and fear-mongering. He is the worst possible person to lead our country through a global health emergency.”

In his primary debate with Sen. Bernie Sanders (I., Vt.) on March 15, Biden also falsely claimed the Trump administration had refused a World Health Organization offer for coronavirus testing kits when no such offer had been made, reported Free Beacon.

Meanwhile, during an interview on ABC’s “This Week,”, Biden told George Stephanopoulos on Sunday that President Donald Trump should have stopped travel from China sooner than he did to fight the coronavirus pandemic. Continued Below

(Related: Karl Rove Rips Biden For Sending Out A Coronavirus Fundraising Email: “Does He Have No Shame?”)

“I complimented him on dealing with China. Well you know, 45 nations had already moved to keep– block China’s personal from coming into the United States before the president moved,” said Biden.

“So it’s about pace. It’s about– it’s about the urgency, and I don’t think there’s been enough of it,” Biden claimed. Video Below

Biden also called on President Donald Trump to enact the Defense Protection Act and appoint a supply commander to combat the coronavirus. On March 18, the Commander in Chief invoked the DPA, and Rear Adm. John Polowczyk has been in charge of supplies.

Over 2 months ago, when Trump announced travel restrictions with China, Joe Biden was criticizing Trump for “xenophobia.”

Today, Biden criticized Trump for the speed he enacted the travel ban.

President Trump announced restrictions on Travel to and from China in response to Coronavirus.

We leave you with a few other highly engaged moments that sparked social media during Biden’s Sunday interview on ABC:

It’s not called the “cona.”pic.twitter.com/SATING8Yya

Joe Biden starts to lie about budgets under President Trump, appears to forget his point halfway through.