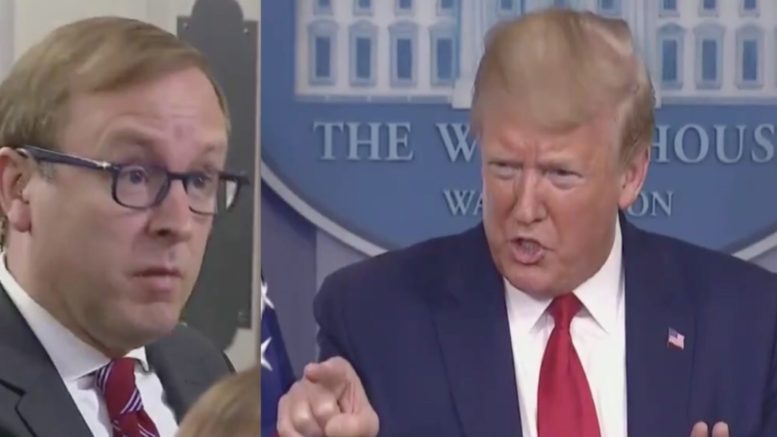 Monday during the Coronavirus Task Force briefing, President Trump flipped the script on Jonathan Karl after the ABC News chief White House correspondent questioned the president over an HHS OIG report, which found hospitals across the country reportedly facing shortages of medical equipment.

“If I could follow up on this question of the HHS inspector general, by the way, her name is Christi Grimm, and it wasn’t so much her opinion. They interviewed over 323 different hospitals….,” Karl told the president.

The Commander in Chief asked the ABC reporter, “When was she appointed?”, to which Karl replied, “I’m not sure when she was appointed.”

Later during the briefing, the president asked Karl, “How long has that person been in government?”

“She did serve in the previous administration,” the ABC reporter admitted to the President. Continued Below

“See, there’s a typical fake news deal. You’re a third rate reporter,” the president fired off. “And what you just said is a disgrace, okay?”

Trump: "Where did it come from, the inspector general? What’s his name?"

Reporter: "I don’t know his name."

President Trump asked Jon Karl to find out when the HHS IG was appointed:

"You are a third rate reporter and what you just said is a disgrace… you will never make it."

The Admiral reiterates that the administration has been able to meet state ventilator requests. pic.twitter.com/eHOGrgbhfz