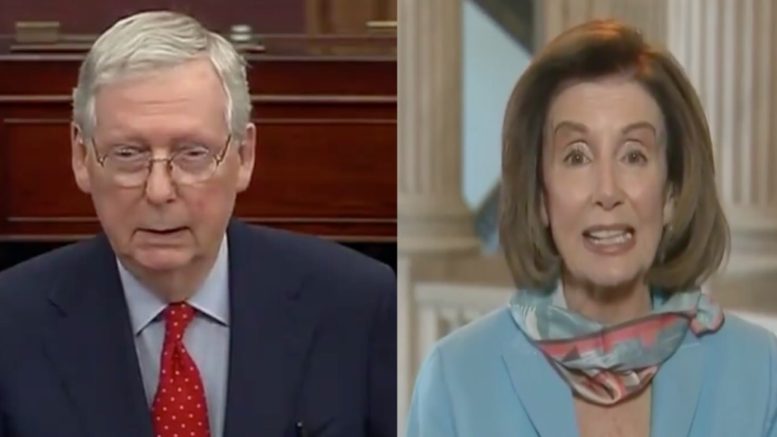 Two weeks ago, however, Senate Republicans tried to pass a “clean” bill by unanimous consent that would have simply boosted PPP funding by $250 billion. Senate Democrats objected and blocked the bill.

Last Tuesday, the House Speaker took a brief moment to “congratulate” Senate Democrats for blocking $250 billion in emergency relief to small business owners as part of the Payroll Protection Plan, during an interview with MSNBC’s Chris Hayes.

“So last week when they came– they asked for a quarter of a trillion dollars in forty-eight hours,” Pelosi said. “And I said, ‘Well, I don’t, I don’t think so. Let’s see how we can open this up to many more people. So, Chuck Schumer and I — this all happened on the Senate side, and I congratulate the Senate Democrats– they all went to the floor when Mitch McConnell went in for 250 (billion dollars) and they said they objected.”

In her “Morning Joe” interview on Wednesday, Pelosi said it was wrong for Senate Republicans to just focus on adding more funds to the PPP, which allows businesses to keep workers on the payroll during the COVID-19 pandemic, and placed the blame on Senator McConnell for the delayed funding.

“But again, Mitch McConnell likes to say that we delayed the bill. No, he delayed the bill,” she claimed. “Two weeks ago, he came to the floor and said, ‘This is all we’re doing. Just the 250.’ And Democrats were reunited, House and Senate, the Senate Democrats went to the floor and said, ‘No, no’ to that, we have a better idea about hospitals and testing, and more funds for all of the businesses, the lower– shall we say the unbankable small businesses.” Continued Below

“So we were very pleased that he finally came around to the fact that we had to go forward with this. So he was the one wasting time. I say that because I keep hearing him say we delayed– no, he delayed,” Pelosi alleged, placing the blame on Senator McConnell.

“But here we are and we’re ready to go on to the next bill to help our heroes, our health care workers, our firefighters, our first responders, EMS, our folks who are doing all the wonderful work to save lives as they risk their lives and now they may lose their jobs,” she added.

Meanwhile, Pelosi released a statement after Easter and said of President Trump: “The truth is a weak person, a poor leader, takes no responsibility. A weak person blames others.” Continued Below

When announcing a deal had been reached, Senate LeaderMcConnell released a statement Tuesday, pointing out that it was in fact, Democrats who had delayed the additional funding for the PPP after it had run out of funding.

“Republicans never wanted this crucial program for workers and small businesses to shut down. We tried to pass additional funding a week before it lapsed. But Democratic leaders blocked the money and spent days trying to negotiate extraneous issues that were never on the table,” Senator Mitch McConnell said in part, in a statement.

The Senate on Tuesday approved roughly $484 billion in new coronavirus aid for small businesses and hospitals and more funding for testing.

The deal includes an additional $310 billion for the Paycheck Protection Program (PPP), including $60 billion specifically for community banks and smaller lenders, as well as $75 billion for hospitals, $25 billion for testing, and $60 billion for emergency disaster loans and grants, The Hill reported. Video Below

I am encouraged that Democrats have finally agreed to reopen the Paycheck Protection Program and abandon a number of their unrelated demands. My full statement on Congress’s new bipartisan agreement to provide additional small-business support, more funding for testing, and more: pic.twitter.com/nDnhxbs9KB

I’m proud of Congress’s new bipartisan agreement. I am just sorry that Democrats shut down emergency support for Main Street in a search for partisan “leverage” that never materialized.

It’s time to move forward together and get this done for the American people. pic.twitter.com/cUkQU0MT9P