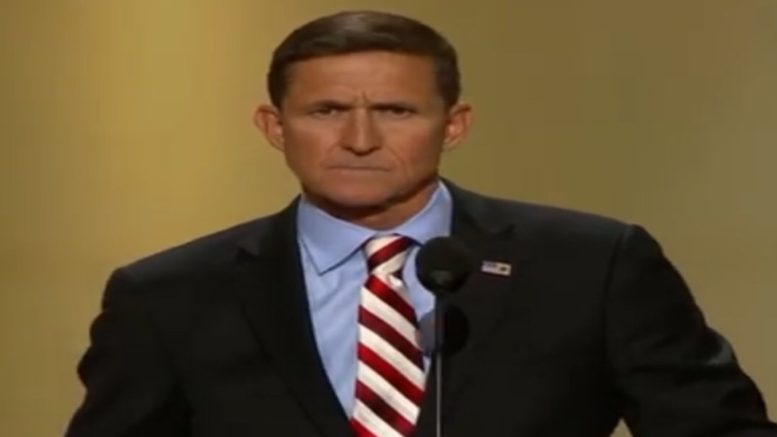 Explosive new internal FBI documents unsealed Wednesday show that top bureau officials discussed their motivations for interviewing then-national security adviser Michael Flynn in the White House in January 2017 — and openly indicated that their “goal” was “to get him to lie, so we can prosecute him or get him fired,” Fox News reported.

This comes as the Justice Department turned over documents this week, even though a February 2018 standing order in the case required the government to turn over any exculpatory materials in its possession that pertained to Flynn.

As reported by Fox News, the handwritten notes — written by the FBI’s former head of counterintelligence Bill Priestap, Fox News is told — indicated that agents planned to get Flynn “to admit to breaking the Logan Act” and catch him in a lie. The Logan Act is an obscure statute that has never been used in a criminal prosecution; enacted in 1799, it was intended to prevent individuals from falsely claiming to represent the United States abroad.

The bombshell documents strongly suggested the agents weren’t truly concerned about Flynn’s intercepted contacts with then-Russian Ambassador Sergey Kislyak, except as a pretext. Former President Obama personally had warned the Trump administration against hiring Flynn and made clear he was “not a fan,” according to multiple officials. Obama fired Flynn as head of the Defense Intelligence Agency in 2014, as reported by Fox News.

Flynn previously charged that top FBI officials, including then-FBI Deputy Director Andrew McCabe, pressed him not to have the White House counsel present during the questioning with two agents that ultimately led to his guilty plea on a single charge of lying to federal authorities.

One of those agents was Peter Strzok, who has since been fired from the bureau after his anti-Trump text messages came to light. Flynn has withdrawn his guilty plea and has been seeking exoneration, per Fox News. Continued Below

Unsealed FBI notes reveal the intent of the FBI’s 1/24/17 interview of Flynn:

Unsealed FBI notes reveal the intent of the FBI’s 1/24/17 interview of Flynn:

“What is our goal? Truth/Admission or to get him to lie, so we can prosecute [Flynn] or get him fired?”

FBI Notes confirm it was all a pretext. pic.twitter.com/Y4IDyE4YZm

#FLYNN docs just unsealed, including handwritten notes 1/24/2017 day of Flynn FBI interview. Transcript: “What is our goal? Truth/Admission or to get him to lie, so we can prosecute him or get him fired?” Read transcript notes, copy original just filed. @CBSNews pic.twitter.com/8oqUok8i7m

Then-FBI Director James Comey admitted in 2018 that the Flynn interview didn’t follow protocol, and came at his direction. He said it was not “something I probably wouldn’t have done or maybe gotten away with in a more … organized administration.”

McCabe would later say the interview was “very odd” because “it seemed like [Flynn] was telling the truth” to the two agents who interviewed him. Flynn, the interviewing agents told McCabe, “had a very good recollection of events, which he related chronologically and lucidly,” did not appear to be “nervous or sweating,” and did not look “side to side” — all of which would have been “behavioral signs of deception.”

During the interview, Flynn told the agents “not really” when asked if he had sought to convince Kislyak not to escalate a brewing fight with the U.S. over sanctions imposed by the Obama administration, according to a FD-302 witness report prepared by the FBI.

Flynn issued other apparently equivocal responses to FBI agents’ questions, and at various points suggested that such conversations might have happened or that he could not recall them if they did, according to the 302. The 302 indicated that Flynn was apparently aware his communications had been monitored, and at several points he thanks the FBI agents for reminding him of some of his conversations with Russian officials. Continued Below

Email from Peter Strzok to McCabe.

They discussed the potential of the interview occurring over the phone with McCabe – with an FBI agent to be posted to take notes.

Also – Lisa Page emails Strzok re: how to conduct the Flynn interview. pic.twitter.com/liVCVdsrJN

Read the full it all here:https://t.co/xLGgNjHPoL

“I’m reading these handwritten notes and my initial reaction is nothing. I knew my father was set up from Day 1. Today confirms it.”

If sources are correct, “it will put the FBI in the darkest possible light.” @SidneyPowell1 @JosephJFlynn1 pic.twitter.com/pu3s12GoJN