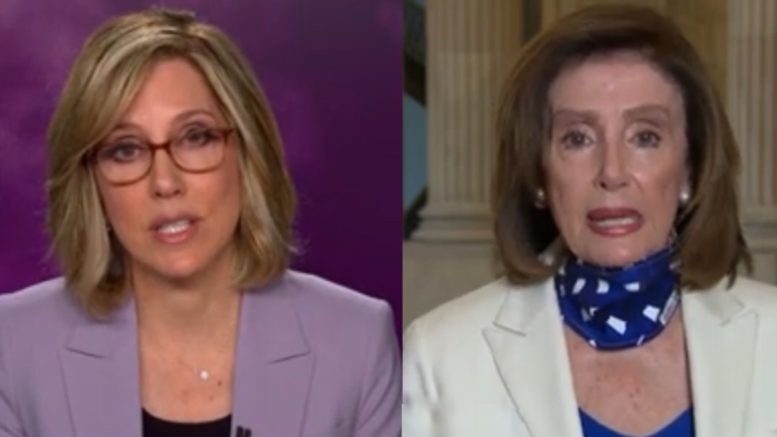 In an interview on CNN Tuesday, House Speaker Nancy Pelosi (D-CA) was pressed by Alisyn Camerota on whether Joe Biden should publicly address the sexual assault allegations leveled against him from a former Senate staffer.

The allegation against Biden is leveled by Tara Reade, who said she was a staff assistant for Biden in 1993 when he was in the Senate. Biden has faced increasing pressure to personally address the claim. His campaign has denied the allegation.

Camerota asked Pelosi if she thinks it is time for Joe Biden to address the sexual assault allegations “head-on himself”, to which the House Speaker replied: “I have great sympathy for any women who bring forth an allegation. I’m a big, strong supporter of the Me Too movement. I think it’s made a great contribution to our country.”

Camerota corrected Pelosi and firmly told the House Speaker: “He hasn’t, to be clear. He hasn’t addressed it, his campaign has addressed it. But he has not directly it. Should he directly, publicly address it?”

“You know, it’s a matter that he has to deal with,” Pelosi replied. “But, I am impressed with the people who worked for him at the time, saying absolutely never heard one iota of information. Nobody ever brought forth a claim or had anybody else tell them about such a claim.” Continued Below

Pelosi quickly turned the subject to praise the presumptive Democratic presidential nominee: “But again, we have an important election at hand, one that I think is most important that we’ve had. We say that every election, but I think this one is the most crucial.”

“And I supported [Biden] because he’s the person of great values, integrity, authenticity, imagination, and a connection to the American people. He’s the personification of hope and optimism for our country, and I was proud to endorse him. And America needs a person like Joe Biden with his integrity, and again, his vision for the future,” she added.

In 2018, Pelosi appeared to believe Dr. Christine Blasey Ford’s claims against Justice Kavanaugh as she had tweeted the hashtag “#BelieveSurvivors”.  Video Below

CNN's Alisyn Camerota calls out Nancy Pelosi after she says Joe Biden has addressed allegations: "he has not"https://t.co/PpQgEzVjQS pic.twitter.com/66sgH3wSqY

Far too few people are recognizing Dr. Ford’s sheer bravery in sharing her story today. That *must* not be overlooked. #BelieveSurvivors #KavanaughHearings https://t.co/dBGwOUmZYI

Tara Reade is calling on the University of Delaware to unseal documents it has from Joe Biden while he served as a senator, which she believes may include her formal sexual harassment complaint.

“I’m calling for the release of the documents being held by the University of Delaware that contain Biden’s staff personnel records because I believe it will have my complaint form, as well as my separation letter and other documents,” Reade told Fox News on Tuesday. “Maybe if other staffers that have tried to file complaints would come to light — why are they under seal? And why won’t they be released to the public?”

On Wednesday, CNN’s Chris Cillizza noted that “Biden’s campaign is, to put it simply, twisting the [New York Times] report to suggest that Reade’s allegations (and the corroboration from her brother and friend) are meaningless because, well, Biden denies it and no former staffer can corroborate it. Again, not accurate.”

“As I have written before, an allegation like this in the #MeToo era can’t be pushed aside with a dismissive denial from an aide or talking points that misconstrue great reporting by the Times. The accusation merits a personal response from Biden. Still,” Cillizza added.