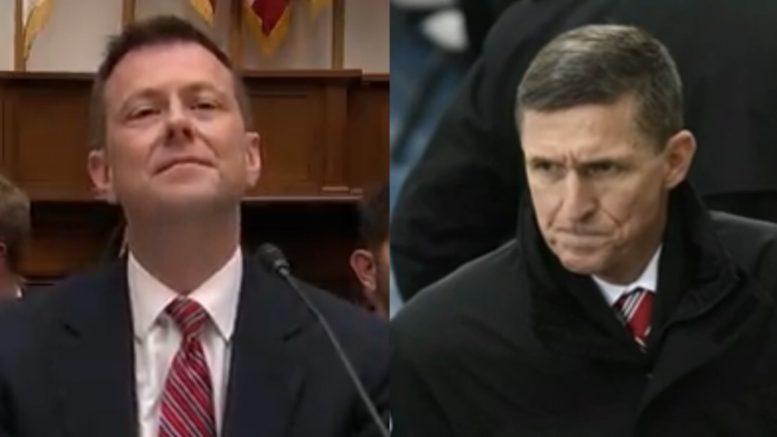 Internal FBI documents unsealed Thursday indicate that Peter Strzok — the now-disgraced anti-Trump former head of FBI counterintelligence — ordered the investigation of former national security adviser Michael Flynn to remain open even after it was slated to be closed due to a lack of so-called “derogatory” information, Fox News reported.

The new documents come a day after it was revealed that top bureau officials in the FBI had discussed their motivations for interviewing Flynn in the White House on January 24, 2017 — and openly questioned if their “goal” was “to get him to lie, so we can prosecute him or get him fired.”

Thursday’s document release shows that on January 4, 2017, weeks before the fateful January 24, 2017 White House interview, the FBI’s Washington Field Office issued a “Closing Communication” indicating that the bureau was terminating “CROSSFIRE RAZOR” — the newly disclosed codename for the investigation of Flynn, as per Fox News.

According to the January 4 memo, the goal of CROSSFIRE RAZOR was to determine whether Flynn “was directed and controlled by” or “coordinated activities with the Russian Federation in a manner which is a threat to the national security” of the United States or a violation of federal foreign agent laws.

The memo also discusses additional FBI efforts to check information on Flynn, apparently through other US agencies. Just like the FBI, they also found “no derogatory information” on Flynn. Based on the lack of derogatory information, the Washington Field Office concluded that Flynn “was no longer a viable candidate as part of the larger CROSSFIRE HURRICANE umbrella case.”

FBI and US Govt (CIA?) databases showed “no derogatory information” on Flynn.

Flynn determined to be “no longer a viable candidate” as part of the Crossfire Hurricane case. pic.twitter.com/5RfnnjucOp

The January 4 memo concluded with this paragraph: “The FBI is closing this investigation. If new information is identified or reported to the FBI regarding the activities of CROSSFIRE RAZOR, the FBI will consider reopening the investigation if warranted.”

Strzok informed the FBI case manager that the FBI’s 7th floor was involved, referring to FBI leadership — and that they still “need to decide what to do with him [with respect to] the [REDACTED].”

Strzok: “If you haven’t closed RAZOR, don’t do so yet”

It’s currently unknown why Strzok directed the FBI case manager to keep the Flynn investigation open. However, the timing of emails between Strzok and ex-FBI lawyer Lisa Page seem to suggest that they used the Logan Act to keep CROSSFIRE RAZOR alive; Strzok forwarded a 14-page research paper on the Logan Act the same day, per Fox News.