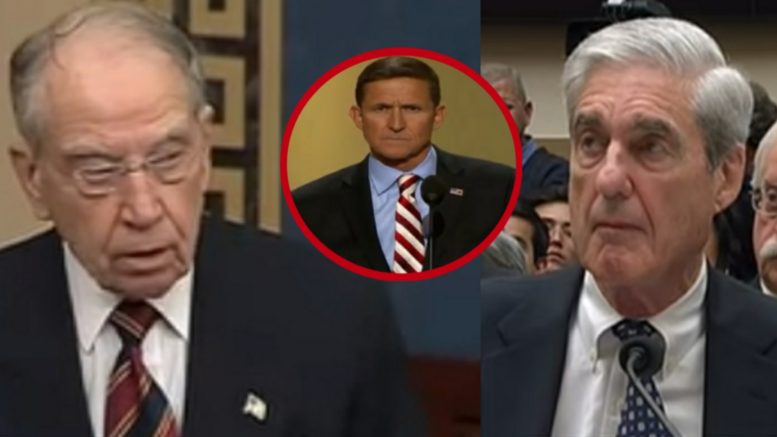 Senator Chuck Grassley made a suspicious discovery in regards to the explosive unsealed documents related to the case against General Michael Flynn.

After reviewing the documents, many of which include handwritten notes by officials who worked the case, Grassley concluded what Flynn’s team has been saying all along — that the 30-year military veteran was railroaded by America’s top intel agencies. But that wasn’t the Senator’s only concern, as he pointed out what the documents were stamped with.

Did Mueller have these docs? Why did his team sit on them? What else is Mueller team that cost taxpayers $30+ million hiding?,” he questioned. “The [people] deserve answers [to restore] faith in federal law enforcement agencies.”

Did Mueller have these docs? Why did his team sit on them? What else is Mueller team that cost taxpayers $30+ million hiding? The ppl deserve answers 2restore faith in federal law enforcement agencies

Here are some of the actual documents tweeted by Catherine Herridge, that shows “DOJSCO” stamped at the bottom that Sen. Grassley is referring to.

Prior to mentioning the stamps on the unsealed documents, Sen. Grassley unleashed four other tweets, where he called for more transparency and for Attorney General Barr to “intervene” and “#FREE FLYNN”.

Obviously not true! Time to put all cards on the table Transparency brings accountability

AttGen Barr: it’s so obvious the unconstitutional punishment that GenFlynn has had for four long years u need to intervene and #FREE FLYNN

In ending, here is video of Senator Grassley giving his take on the entire controversy surrounding General Flynn: