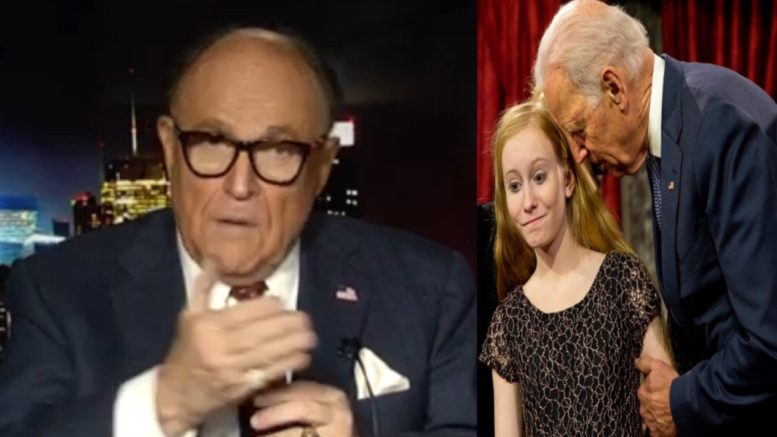 “This whole sexual behavior by Biden, that’s one thing. The corruption is already proven. All you have to do is go to my podcast, I’ve got eight episodes,” Giuliani said on Fox News. “I’ve got the documents, I’ve got the tapes. I mean it’s proven about five different ways, including with a money laundering transaction that is a smoking gun.”

“Biden and the Biden family took millions and millions of dollars to sell Joe Biden’s office. They’ve been doing it for 20 to 30 years,” he continued. “It’s a travesty and it’s disgusting that the press covers it up. And it’s ridiculous that you have to get to a sexual assault allegation. Look what they’re doing with that.”

“I mean they’ve had it for a month. They tried to crucify [Brett] Kavanaugh with it. Kavanaugh had to prove his innocence. Biden, you’ve got to not only prove his guilt, [but you also] got to prove it beyond a reasonable doubt,” Giuliani explained.

“This guy, … everybody thought he was just good ole Joe. First of all, he was always a dope. He’s a major dope. Number two, he’s a crook– for years, and it’s proven. Just give me [a] half-hour. I can prove it to anybody who’s not a sick Democrat,” he insisted.

“And third, I have to presume him innocent of this: but he surely has to be investigated. You have the woman’s allegation. You have four separate witnesses who corroborate aspects of it, and then, you have prior conduct. And when we saw that conduct, we all said, ‘What the heck is this about? Who does this?’ What man smells little girl’s hair?” Rudy Giuliani asked. Continued Below

Fox News’ Jesse Watters responded: “Put the whole thing together. So you have the videos of him acting extremely creepy. You have a potential smoking gun document that, who knows where it is– if it’s in the Senate file, if it’s in a University of Delaware file. You don’t know where it is. You also have Biden potentially being in the room when the president was briefed on the [Steele] dossier and they made the decision to brief President Trump on it– to send [James] Comey in there.”

“He’s implicated in Spygate. He can’t say he wasn’t there. Or maybe he wasn’t there,” Watters said, pointing to his head. “And as you said, you have financial dealings that raise all kinds of questions, all over the world with his family. I mean, he’s got a lot of exposure.”

Last March, counselor to the president, Kellyanne Conway, weighed in on the allegation a former Nevada lawmaker, who had accused Biden of inappropriately touching and kissing her, Lucy Flores.

Kellyanne said, “If anybody just types in ‘Creepy Uncle Joe Videos,’ you come up with a treasure trove– far more evidentiary information and videos than we saw when Brett Kavanaugh’s nomination was trying to be derailed and him, as an individual and family, being destroyed by folks who had no evidence of what allegedly happened 34 years earlier.”

In ending, we leave you with a video from Paul Joseph Watson detailing questionable behavior by Biden.