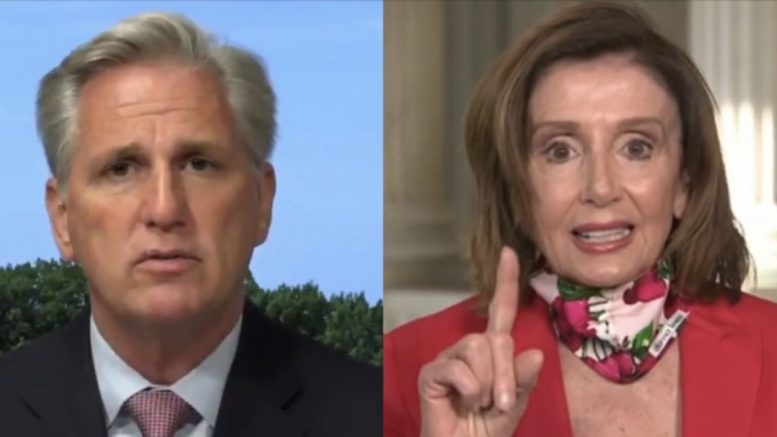 McCarthy made the assessment while responding to the absence of the House of Representatives at the Capitol on Monday, as the Senate was back in session following an extended recess.

House Democrat leadership reversed their decision to return to Capitol Hill this week, citing safety issues related to the coronavirus. However, McCarthy suggested there is more to it.

“With the House not working, that only gives Nancy Pelosi more power, and gives China a pass,” McCarthy said.

After catching McCarthy’s insinuation that the House Speaker would rather not have Congress in session, Lou Dobbs asked, “Can you in any way explain why [Pelosi] would not want to have the House of Representatives in session?” Video Below

“If they’re not in session, it gives her a great deal amount of power,” McCarthy replied. “Where she can write a one trillion, two trillion dollar bill and then bring everybody back and that’s all they can vote on, so the American public does not have a voice in it. That’s why committees should start coming back.”

He explained that with committees, you can bring “a few at a time” and “meet in bigger rooms”, which would help with social distancing. Then when it’s time to vote on legislation, you could bring everyone back to do so.

“But right now, it provides for more power by not having people here,” McCarthy said. “One thing it does do, Lou. It takes away the voice of all the American public.” Video Below

Nancy’s Power Trip: @GOPLeader Kevin McCarthy says Nancy Pelosi is keeping The House out of session to wield a great deal of power and remove the voice of the American people. #AmericaFirst #MAGA #Dobbs pic.twitter.com/5VdwNB7ntG