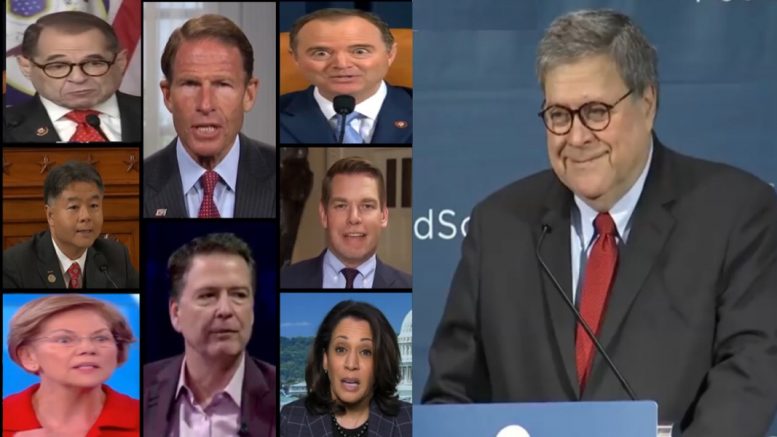 (Related: Trump Reacts After The DOJ Dismisses Its Case Against General Flynn: “What The Obama Administration Did Is Unprecedented”)

President Donald Trump reacted Thursday at the White House while taking questions from reporters, saying that General Flynn is “a hero”, but pointed out, “what the Obama administration did is unprecedented.” Continued Below

Following the DOJ’s decision to withdraw its case against General Flynn, Democrats vented their frustration at Attorney General William Barr.

The DOJ has lost its way. But, career people: please stay because America needs you. The country is hungry for honest, competent leadership.

Play this video of Comey bragging about setting a perjury trap for Michael Flynn as Nicolle Wallace giggles like a schoolgirl on repeat
pic.twitter.com/0UAVMGVREE

Due to the ongoing COVID-19 emergency, I worked with DOJ to postpone our scheduled hearing with AG Barr as attentions and resources appropriately went to responding to the pandemic. But rest assured, we are going to reschedule that hearing, ASAP, and demand answers! 2/2 https://t.co/OywQR41khM

Flynn pled guilty to lying to the FBI about his illicit Russian contacts.

His lies do not now become truths.

This dismissal does not exonerate him.

But it does incriminate Bill Barr.

In the worst politicization of the Justice Department in its history.

The Justice Department filing does not show Michael Flynn is innocent. He still lied to the @FBI, a felony. He still violated FARA, a federal offense.

AG Bill Barr made a transparently political decision that further shreds the credibility of the Justice Dept. https://t.co/ZAhaBknTZA

William Barr is not the President’s lawyer – he is the country’s lawyer. His political interference is blatantly corrupt and he should resign.

Never mind that Flynn pleaded guilty to lying to investigators, AG Barr’s DOJ will drop the case. Democracies become autocratic when officials in power use crises to cover up their flagrant disrespect for the rule of law. https://t.co/LcGN1MVucT

AG Barr is the poster child of Trump’s complete contempt for legal norms. He gives face & voice to a cover-up—enough is enough.

If you don't want America to be a tin-pot dictator's playground, vote him out! https://t.co/11YkYqnCGx

If you are pissed that @realDonaldTrump is corruptly dropping charges against Flynn then #YouShouldProbablyVote https://t.co/Oe5BoBh0hK

As I said during Bill Barr's confirmation, the Attorney General needs to be the people's lawyer. Yet again, Barr's Department of Justice is not treating all Americans equally under the law, but instead acting like the President’s personal attorney.

Millions of people—mostly black and Latino men—spend years in jail trying to prove their innocence. Some die in jail.

Michael Flynn was exonerated for crimes *he admitted to* with the blink of an eye.

Millions of people—mostly black and Latino men—spend years in jail trying to prove their innocence. Some die in jail.

Michael Flynn was exonerated for crimes *he admitted to* with the blink of an eye. https://t.co/aW9XRcA4gz

Bill Barr has consistently done Donald Trump's bidding and corrupted our justice system. I called for it last year and I'll say it again: he must resign. pic.twitter.com/atbmMMQRLw