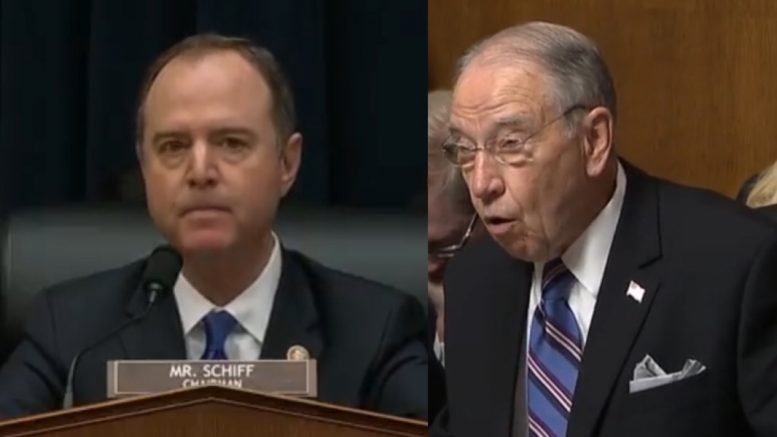 Richard Grenell, the Director of National Intelligence, plans to release 53 declassified transcripts of witnesses that testified before Congress regarding the FBI’s Russia probe into President Donald Trump and his campaign. The transcripts have been blocked for nearly a year by Chairman of the House Intelligence Committee, Adam Schiff (D-CA).

Despite a bipartisan vote in September 2018 by the committee, Rep. Adam Schiff has refused to release the transcripts to the public.

In a letter to Schiff dated May 4, Richard Grenell wrote: “All of the transcripts, with our required redactions, can be released to the public without any concerns of disclosing classified material. In the interests of transparency and accountability, I urge you to honor your previous public statements, and your Committee’s unanimous vote on this matter, to release all 53 cleared transcripts to all Members of Congress and the American public as soon as possible.”

Senator Chuck Grassley reacted to Grennel’s move to put Schiff in check in a pair of tweets on Wednesday:

“Cong Schiff is withholding transcripts from [the] American [people] relating to Russia probe. Acting Intelligence Chief Grenell said they are ready [to be] released for public viewing. WHY DELAY? Transparency brings accountability! What a breath of fresh air Grenell is bringing [about] declassifying,” Sen. Grassley tweeted.

“The more we learn about [the] Russia probe, the more it seems we were right [to be] concerned all along. House Intel transcripts need [to be] released so we can all know what House Democrats have kept secret,” he added.

On Tuesday, Rep. Jim Jordan (R-OH) along with nearly two dozen House Republicans, called on Schiff to stop blocking the release of the interview transcripts, as well as any other documents obtained during the House Intelligence Committee’s Russia probe.

“We understand now that Chairman Schiff is blocking the release of these transcripts,” the lawmakers wrote. “This news, if accurate, is disturbing—especially in light of Chairman Schiff’s cries in 2019 for transparency regarding allegations that the Trump campaign colluded with Russia.” Continued Below

Cong Schiff is withholding transcripts from American ppl relating to Russia probe Acting Intelligence Chief Grenell said they are ready 2b released for public viewing WHY DELAY? Transparency brings acctability! What a breath of fresh air Grenell is bringing abt declassifying

Schiff had sent a letter in mid-April ordering that the witness transcripts not be shared with President Trump, nor the White House lawyers. He made this clear, even if the declassification process required sharing, as reported by Sara A. Carter. Video Below

“Such transcripts remain the sole property of HPSCI, and were transmitted to ODNI for the limited purpose of enabling a classification review by IC elements and the Department of Justice,” Schiff added.