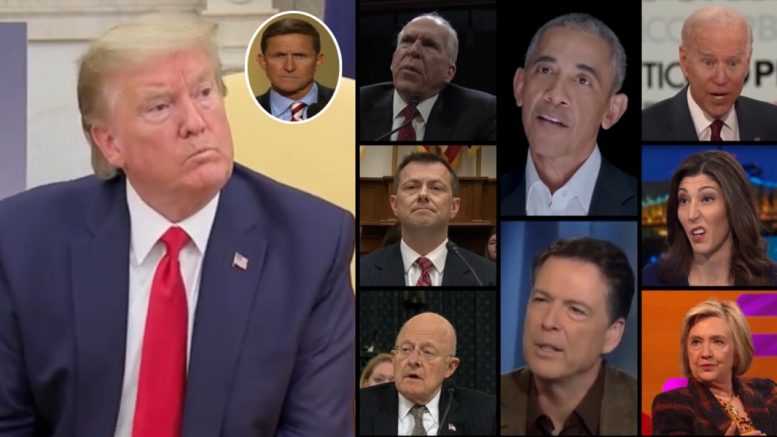 President Donald Trump reacted Thursday at the White House while taking questions from reporters, saying that General Flynn is “a hero”, but pointed out, “what the Obama administration did is unprecedented.”

“He was an innocent man. He is a great gentleman,” the Commander in Chief told reporters Thursday. “He was targeted by the Obama administration, and he was targeted in order to try and take down a president. And what they’ve done is a disgrace, and I hope a big price is gonna be paid, a big price should be paid.”

“It’s never been anything like this in the history of our country,” the president said. “What they did– what the Obama administration did is unprecedented, it’s never happened. … And I hope a lot of people are gonna pay a big price [be] cause they’re dishonest crooked people. They’re scum, and I say it a lot. They’re scum, they’re human scum. This should have never happened in this country.”

President Trump explained the officials went after General Flynn by trying to get him to lie, adding “The Obama administration– the Justice Department was a disgrace, and they got caught– very dishonest people. But much more … it’s treason.” Continued Below

Asked who he would like to see pay a price, the president responded: “The people should pay a big price for what they’ve done to this country. … And their partner– very complicit, is a thing called the media. The media is totally guilty. And all of those writers and so-called journalists, they’re not journalists, they’re thieves.”

“All of those journalists that received a Pulitzer prize, should be forced to give those Pulitzer prizes back because they were all wrong. … Because you know what? They were given out falsely. It was fake news. They’re all fake news. And whoever gives the Pulitzer prizes, they’re a disgrace, unless they take those prizes back,” President Trump suggested. Video Below

BREAKING: President Trump reacts to the news that The DOJ is dropping charges against @GenFlynn. pic.twitter.com/auFGsy3Urg

The Justice Department has asked the court to dismiss the case against General Flynn.

“Through the course of my review of General Flynn’s case, I concluded the proper and just course was to dismiss the case. I briefed Attorney General Barr on my findings, advised him on these conclusions, and he agreed.”