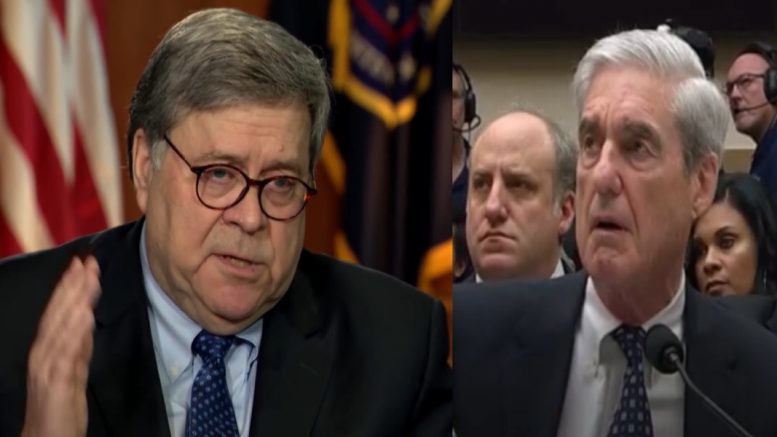 Attorney General William Barr spoke with CBS News senior investigative correspondent Catherine Herridge on Thursday weighing in on the unverified Steel dossier and revealed that “Robert Mueller was responsible for looking at [the dossier] under his charter”, during his probe.

“Does Director [Chris] Wray have what it takes to make the changes at the FBI?” Herridge asked the attorney general.

“Yeah, as I’ve said, he’s been a great partner to me in our effort to restore the American people’s confidence in both the Department of Justice and the FBI,” AG Bill Barr replied. “We work very well together, and I think both of us know that we have to step up– that it’s very important to restore the American people’s confidence.”

Asked does FBI Director Wray have his arms around the gravity of what happened in 2016 and 2017, AG Barr said: “I think he does.”

Catherine Herridge brought up the subject of the Steele dossier, citing Inspector General Michael Horowitz’s 478-page report, which was released in December 2019, that pertained four FISA applications and other aspects of the FBI’s Crossfire Hurricane investigation.

“Newly declassified footnotes in the Horowitz report suggest that the Steele dossier was likely the product of Russian disinformation, and there were multiple warnings to the FBI at that time, yet, they continued to use it. How do you explain that?” Herridge asked AG Barr. Continued Below

The attorney general responded: “I think that’s one of the most troubling aspects of this whole thing. And in fact, I said in testimony on the Hill, I can’t remember if it was my confirmation that I said, ‘I was very concerned’ about the possibility that that dossier and Steele’s activities were used as a vector for the Russians to inject disinformation into the political campaign.”

“I think that is something that Robert Mueller was responsible for looking at under his charter, which is the potential of Russian influence. But I think it was ignored, and there was mounting indications that this could very well have been happening, and no one really stopped to look at it,” the attorney general stated. [Emphasis added].

Herridge noted the people who were working in the Special Counsel’s office during the investigation were “very smart”, and wondered, “What drove them here?” Video Below

“I think one of the things you have to guard against both as a prosecutor, and I think as an investigator, is that if you get too wetted to a particular outcome, you’re pursuing a particular agenda– you close your eyes to anything that sort of doesn’t fit with your preconception. And I think that’s probably the phenomenon we’re looking at here,” Attorney General William Barr disclosed. [Emphasis added].

The Justice Department on Wednesday released a mostly unredacted version of then-Acting Attorney General Rod Rosenstein’s August 2017 “scope memo” outlining the authority of former Special Counsel Robert Mueller — and the document reveals for the first time that Mueller’s authority went significantly beyond what was known previously.

Previously, it had been revealed that in May 2017, Rosenstein authorized Mueller to probe “i) any links and/or coordination between the Russian government and individuals associated with the campaign of President Donald Trump; ii) any matters that arose or may arise directly from the investigation; [and] iii) any other matters within the scope of [obstruction of justice laws].”