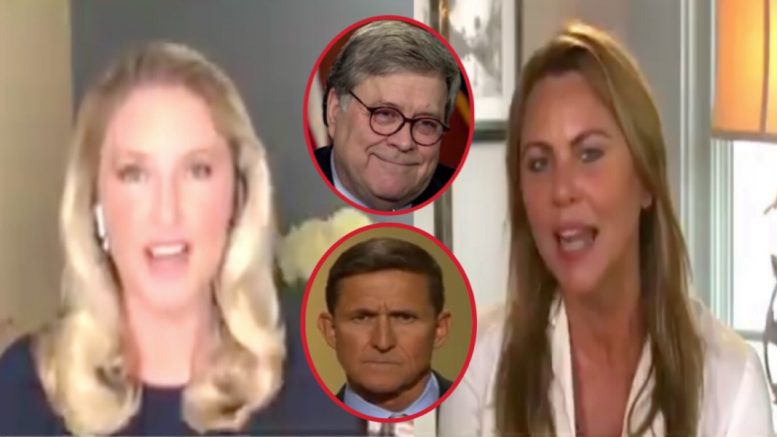 Friday on Fox News‘ “Outnumbered”, former advisor to former Secretary of State John Kerry, Marie Harf, got called out by investigative journalist Lara Logan for suggesting that Attorney General Barr implied, “You can lie to the FBI, and that’s OK”.

The exchange between the two Fox News contributors occurred a day after the Justice Department dropped its case against former National Security Adviser Michael Flynn. The announcement came in a court filing, with the department saying it is dropping the case “after a considered review of all the facts and circumstances of this case, including newly discovered and disclosed information.”

“Yesterday [Bill] Barr basically made a statement that said, ‘You can lie to the FBI, and that’s okay.’ And there is still a ton of evidence that the investigation was absolutely an appropriate one– that [General Michael] Flynn was someone who should have absolutely been investigated. And he, at the end of the day, chose to lie about his contacts with foreign counties,” Marie Harf said.

“If Bill Barr wants to say that’s not a crime, that’s a precedent I’m not sure either party wants to set,” she claimed.

Lara Logan responded to Harf’s claims and fired back: “Wow! I feel like I’m living in some sort of alternative fantasy, sci-fi, reality universe movie.” Continued Below

“That is nothing that could be further from the truth. I’m not sure, Marie, that there was a word that came out of your mouth that’s actually true,” Logan told Harf. “Just look at the transcripts of the conversation.”

“There’s a big difference between talking to people and colluding,” she continued. “If that’s the standard for collusion, then how come you’re not screaming for accountability for Fusion GPS, the DNC, and the Clinton campaign– for literally meeting with FSB agents from Vladimir Putin, for taking disinformation and for using that against the political rival in a presidential election in this country?”

Lara Logan went on to point out an interview he had with CBS’s Catherine Herridge, saying, “Bill Barr has never said that his mission is about defending President Trump. He said it in the CBS interview, and he has said it from the beginning– that his duties are to protect the rule of law in this country, to protect the Justice Department and law enforcement.”

“So what about lying to Congress? Because all of these people [Andrew] McCabe and [James] Comey and all of them, they’ve all lied, and lied, and lied. And there is more information to come here that’s going to show exactly what really happened with Michael Flynn,” Logan added. Video Below

"If that's the standard for collusion, then how come you're not screaming for accountability for Fusion GPS, the DNC, and the Clinton campaign?" pic.twitter.com/899Ip1cV5X

Bill Barr said he is “doing the law’s bidding and his duty under the law”:

.@CBS_Herridge: "When the special counsel report was released last year, you were accused by critics of putting your thumb on the scale in the president's favor. Are you doing the president's bidding in Gen. Flynn's case?"
AG Bill Barr: "No, I'm doing the law's bidding." pic.twitter.com/bdrcypybz0