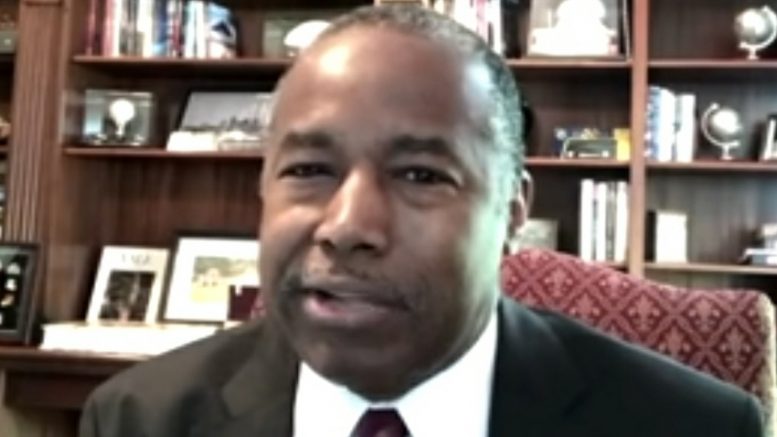 HUD Secretary Dr. Ben Carson explained the best way he thinks the strong economic engine in the U.S. can be revived as millions of Americans are out of work and many businesses are struggling to survive due to the impact of the COVID-19 pandemic.

Carson reminded Americans that the economic crisis the country is now facing was “intentional”, but he is confident that if the correct actions are taken, “we can rapidly get back on that train” of an “extraordinarily strong economy.”

Related Article: Biden To Those Who Benefited From Tax Cuts: “If You Elect Me, Your Taxes Are Going To Be Raised, Not Cut”

Carson replied, “First of all, I think it’s very important to point out that this economic crisis that we’re experiencing right now was intentional, and it was on the back of an extraordinarily strong economy.”

“In 2008, it was just the opposite. We had a very weak economy, so this is a different situation all together,” he continued. “And it’s very important that we not allow the economic infrastructure to be destroyed so that we can rapidly get back on that train again.”

In order to maintain a strong economic infrastructure, Dr. Carson said that it’s crucial for America to “preserve” the small businesses because they are “the backbone of the economy in this country — they employ the vast majority of Americans.”

“And a lot of that has to do with using our brains intelligently — not allowing this virus to completely dominate us,” Dr. Carson asserted. “But, in fact, how do we control it and live with it until we have the ability to completely eliminate it. If we wait until it’s all gone before we come out, our economy will be gone also.” Video Below