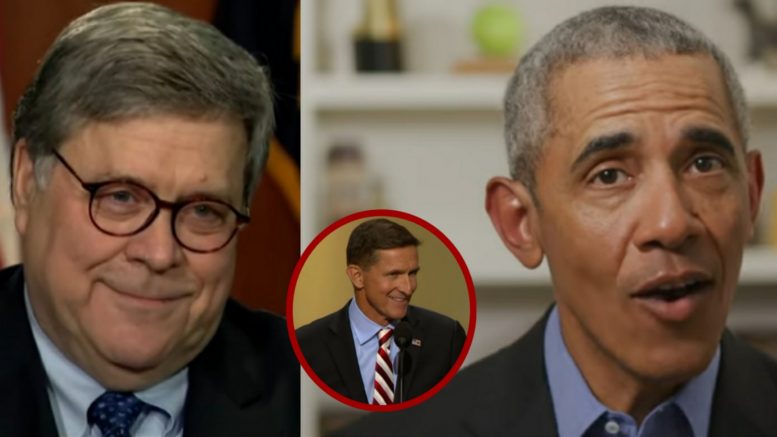 Former President Barack Obama appears to have told his ex-aides that he is “worried” and has a “sense of urgency” to make things “happen” in the 2020 election after learning that the Department of Justice is dropping charges against General Michael Flynn.

The shocking decision by the DOJ came after internal memos were released raising serious questions about the nature of the investigation that led to Flynn’s late 2017 guilty plea of lying to the FBI, Fox News reported.

Related Article: Jesse Watters Rips The Obama Administration Over Their ‘Scandal’: “This Goes All The Way To The Top”

Documents unsealed a week ago by the Justice Department revealed FBI agents discussed their motivations for interviewing Flynn in the Russia probe– questioning whether they wanted to“get him to lie” so he’d be fired or prosecuted, or get him to admit wrongdoing.

“What is our goal?” one of the notes read. “Truth/Admission or to get him to lie, so we can prosecute him or get him fired?”

Despite evidence suggesting Flynn was set up, Obama is heard complaining in a private  conversation that the implications of the DOJ’s decision to drop charges have “been somewhat downplayed” by the news media, and he warned the “basic understanding of rule of law is at risk.” Audio Below

“The news over the last 24 hours I think has been somewhat downplayed — about the Justice Department dropping charges against Michael Flynn,” Obama said. “And the fact that there is no precedent that anybody can find for someone who has been charged with perjury just getting off scot-free.”

“That’s the kind of stuff where you begin to get worried that basic — not just institutional norms — but our basic understanding of rule of law is at risk,” he continued. “And when you start moving in those directions, it can accelerate pretty quickly as we’ve seen in other places.”

“So I am hoping that all of you feel the same sense of urgency that I do,” Obama said. “Whenever I campaign, I’ve always said, ‘Ah, this is the most important election.’ Especially obviously when I was on the ballot, that always feels like it’s the most important election. This one — I’m not on the ballot — but I am pretty darn invested. We got to make this happen.” Audio Below

Exclusive: Obama, in private talk with ex-aides, says “the rule of law is at risk” in Flynn case and calls Trump response to pandemic an “absolute chaotic disaster.” Listen to the tape: https://t.co/HUOXFvPI1m

While Obama is clearly opposed to the Justice Department’s decision, Republicans have seized the moment to reignite calls for those who were involved in Flynn’s case to be held accountable.

Here is video of a former FBI official discussing the latest findings in relation to Flynn’s case: