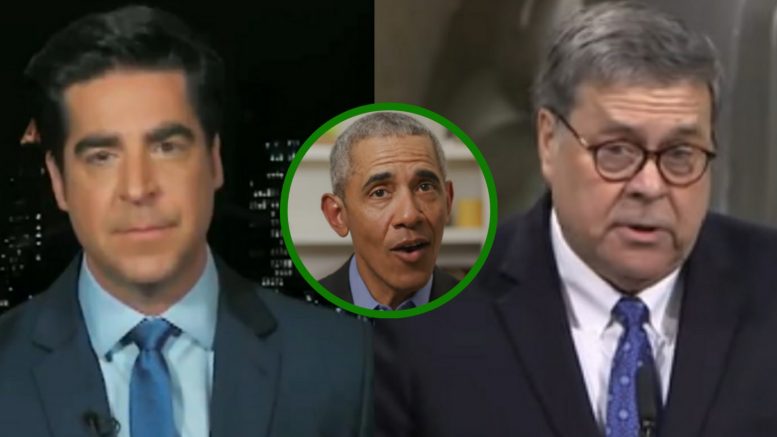 On Saturday’s airing of Watters World, Jesse Watters broke down all of the latest developments surrounding the case against General Michael Flynn and the release of declassified transcripts related to the Russia collusion probe conducted by members Congress.

Transcripts from former Obama officials who testified under oath suggest they knew there was never any evidence of Russia collusion and President Obama was aware of intimate details related to the investigation into General Flynn.

After breaking down all of the explosive new details, Watters revealed that his team just learned that Attorney General Barr was just given “smoking gun documents” that may show just how “powerful” of a role former President Obama played in SpyGate and the Russian collusion “frame up” against President Trump and his administration.

“Sources telling Watters World that Attorney General Bill Barr was just given a trove of smoking gun documents that could point directly at former President Barack Obama, revealing his powerful connection to SpyGate and the Russia hoax,” Watters unveiled.

“Yesterday, President Trump hinted ‘This is far from over’,” he added as he flashed Trump’s Friday tweet that said:

“Yesterday was a BIG day for Justice in the USA. Congratulations to General Flynn, and many others. I do believe there is MUCH more to come! Dirty Cops and Crooked Politicians do not go well together!” Video Below

Related Article: Obama Tells Ex-Aides He Is ‘Worried’ & Has A ‘Sense Of Urgency’ Amid DOJ Dropping Flynn’s Case

“We’ll have to wait and see how this all unfolds,” Jesse said. “Reports are that Adam Schiff is ‘panicking.’ John Durham is working around the clock, putting together a winnable case in court.”

“But if this goes all the way to the top, like it appears it does, Bill Barr is going to have to appoint a special prosecutor, with a wider scope to get to the bottom — or should I say the top of ObamaGate,” Watters declared. Video Below

“The Obama people got caught this week – and it looks like it goes straight to the top.” #WattersWords pic.twitter.com/hGOfBHYdv9