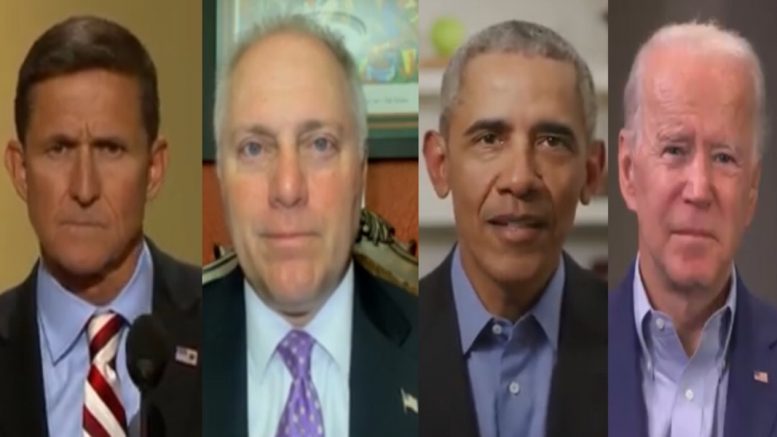 “You know, this is disgusting,” Rep Scalise expressed. “It’s something we have been exposing and fighting to the truth out for a very long time. You know, we’re talking years, trying to get the facts out on this. The FBI and some of the holdovers in the Justice Department were trying to hide this from getting out. Adam Schiff was trying to mislead people about what was going on here.”

Scalise believes “this was a setup by some real dirty cops within the FBI and the Justice Department”, asking, “How high does it go? There are very serious questions being raised about whether it goes all the way to the top. And did Barack Obama and did [the] vice president at the time, Joe Biden, know about this, and encourage it to happen, let alone let it happen?”

Former President Barack Obama appeared to have told his ex-aides that he is “worried” and has a “sense of urgency” to make things “happen” in the 2020 election after learning that the Department of Justice dropped its charges against General Michael Flynn. He further privately bashed Senate Republicans’ investigation of former Vice President Joe Biden and his son’s dealings in Ukraine, a probe Obama’s office said lent credence to a “Russian disinformation campaign.”

Bartiromo expressed that she found Obama’s “disinformation” statement “incredibly rich”, declaring, “The whole thing to take down Trump was based on disinformation from the dossier. And that was his team, his intelligence agencies, the FBI and the CIA.” Continued Below

Scalise responded: “Let’s not forget the Russian disinformation to interfere in our elections in 2016 happened on Barack Obama and Joe Biden’s watch. That’s when we know Russia tried to interfere with the election, but it was Barack Obama and Joe Biden who were in charge at the time. And now, of course all of this comes out, it raises very serious questions, Maria. And the people that we already know were dirty cops, really need to be held accountable, and people need to go to jail.”

“This is so extraordinary to me that this entire thing was a coup to take down then-candidate Trump and then President Trump. And you just wonder how much was orchestrated by [former] President Obama. Do you think we’re gonna find out?” Bartiromo asked Rep. Scalise.

The House Minority Whip believes that we will find out, and said, “The Durham investigation that’s been going on is a criminal investigation, it shifted over that way a long time ago. I want to see that expedited because there is so much public information already out there, let alone what’s known through other hearings.” Video Below

“By the way, I think there were other lower-level people part of this that will talk. … Justice can’t be delayed. Justice has to be carried out swiftly. And then, let’s have these people start talking under oath and find out just how high up it goes,” he concluded.

The truth is out. Now it's time to:
– Expedite the Durham report
– Find out what Obama and Biden knew and when they knew it
– Hold everyone involved in these schemes fully accountable

Justice must be swift so that this can't happen to @realDonaldTrump or anyone else again. pic.twitter.com/KABTqkeZy0