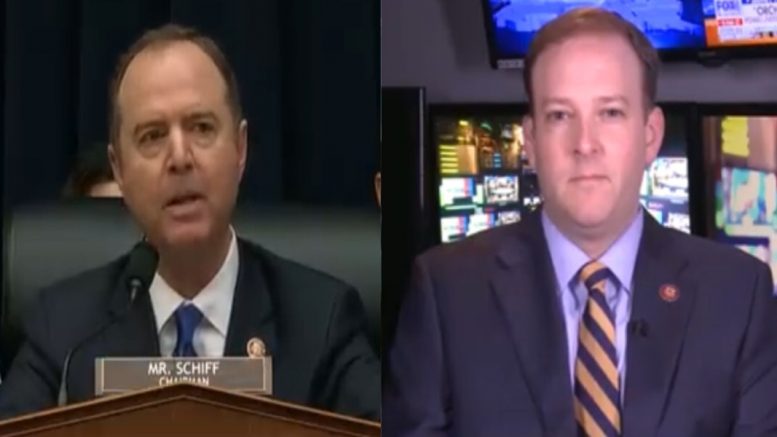 Rep. Lee Zeldin (R-NY) spoke with host Ed Henry on Fox News’ “America’s Newsroom” Monday, calling for Rep. Adam Schiff (D-CA) to be stripped of his post as chairman of the House Intelligence Committee and resign due to the role he played during the Russia probe.

Last Thursday, Schiff released the long-delayed declassified 57 transcript interviews from 2017-2018 that reveal what was said behind closed doors when lawmakers sought to determine whether members of the Trump campaign and Russia colluded.

The transcripts reveal that more than a year into the probe, senior FBI and intelligence officials could offer no specific proof of collusion between Donald Trump’s campaign and Russia.

Former Director of National Intelligence James Clapper, in the transcripts, discussed how the Russians believed Trump would be “easier to deal with” than Hillary Clinton as president.

Clapper also testified: “I never saw any direct empirical evidence that the Trump campaign or someone in it was plotting/conspiring with the Russians to meddle with the election. That’s not to say that there weren’t concerns about the evidence we were seeing, anecdotal evidence. … But I do not recall any instance where I had direct evidence.” Continued Below

Asked what he can do to hold Schiff accountable, Rep. Zeldin declared: “Adam Schiff should not be the chair of the House Intelligence Committee. His gavel should be removed. He should be censured. He should resign. There’s a lot that should happen, but Nancy Pelosi isn’t going to punish Adam Schiff. In fact, that’s the reason why he has the gavel in the first place.”

“He’s the chair of the House Intelligence Committee, which became the House Impeachment Committee because of the way he writes these fairy-tale parodies,” Zeldin said.

Last March, Republicans on the House Intelligence Committee demanded that Schiff step down as chairman over his repeated claims to the media, alleging that there was “more than circumstantial evidence” of collusion between the Trump campaign and Russia.

President Trump had also weighed in on Twitter with the same sentiment, writing: “Congressman Adam Schiff, who spent two years knowingly and unlawfully lying and leaking, should be forced to resign from Congress!”