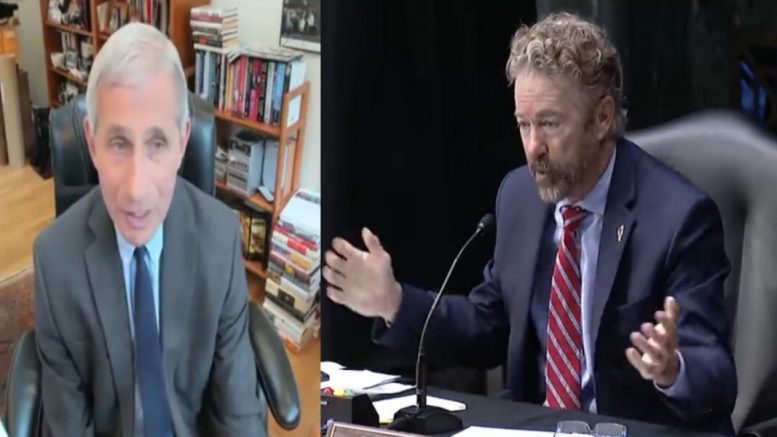 Tuesday during a Senate Health Committee hearing, Senator Rand Paul (R-KY) directly told the director of the National Institute of Allergy and Infectious Diseases, Dr. Anthony Fauci, that he is not the “end-all” when it comes to the coronavirus pandemic.

Sen. Paul’s remark came as he was pressing Fuci for information about immunity for those who have recovered from the virus and the possibility of schools reopening.

In one of the more tense moments of Tuesday’s hearing, Paul – the only U.S. senator to have had a confirmed case of COVID-19 – said the public health response to the pandemic has been riddled with “wrong prediction after wrong prediction” and that Fauci should not be the one making decisions on issues outside his purview, Fox News reported.

“I don’t think you’re one the person who gets to make a decision. We can listen to your advice, but there are people on the other side saying there’s not going to be a surge, and we can safely open the economy,” he added, specifically mentioning decisions about when students can return to classes at their schools.

Dr. Fauci said his recommendations do not extend beyond the realm of science and public health. Continued Below

“I have never made myself out to be the end-all,” Dr. Fauci said. “I’m a scientist, a physician and a public health official, I give advice, according to the best scientific evidence.”

He added: “I don’t give advice about economic things … anything other than public health.”

Following up on Paul’s question about reopening schools come fall, Fauci said that there is still much that researchers don’t know about the novel coronavirus and the country should not be “cavalier” in reopening institutions too quickly. “We don’t know everything about this virus … especially when it comes to children,” Fauci said. “We ought to be careful and not cavalier,” Fox News reported. Video Below