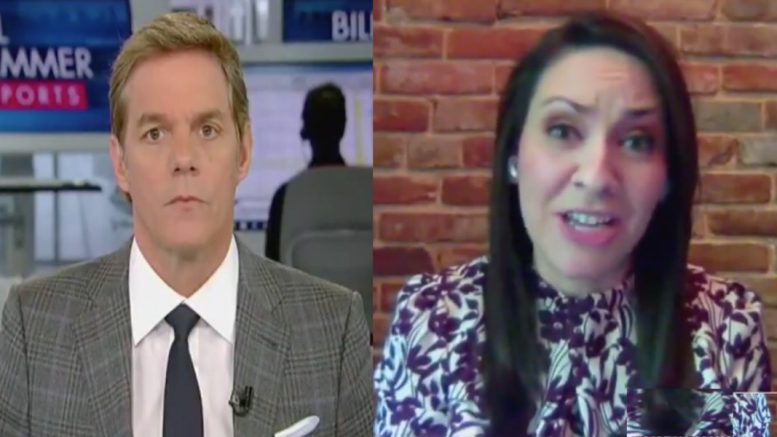 Fox News host Bill Hemmer asked her multiple times for evidence of Trump-Russia collusion, which she was unable to provide.

Bill Hemmer displayed on the screen a document showing that former Vice President Joe Biden, who was involved in the unmasking of General Flynn.

This comes after a memo was declassified and released Wednesday, revealing that Biden and other top Obama officials received information in response to “unmasking” requests targeting Flynn in the final weeks of the Obama administration.

“Why would Joe Biden want to know about Michael Flynn back then?” Hemer directly asked the DNC communications director.

The DNC communications director went on to say: “And yet, you have thousands of Justice Department employees who reacted to the Flynn news and I think generally what we want to see is to make sure that the independence returns to the Justice Department.”

Hinojosa alleged that unmasking is “just to see more intelligence” adding, “It is nothing scandalous in any way. But frankly, this is gonna backfire on Republicans, because it just showed how serious Flynn was and his conversations with the Russians. So Republicans can try to use this to play political football, but in reality, this is going to backfire”.

Asked if it is a crime to talk to other countries or against the law, Hinojosa asserted: “Whenever you are trying to interfere in an election or any way, or try to go against the United States, I think that, you know, that is something that is. … Time and time again, you see this Justice Department politicize issues in order to help Donald Trump.” Video Below

“The answer there was a suggestion, there was collusion. There’s been no proof of that. Where’s yours?” Hemmer directly asked Hinojosa.

.@DNC official @XochitlHinojosa repeats the debunked claim that @GenFlynn & @realDonaldTrump's campaign colluded with the Russians.@BillHemmer asked her multiple times for evidence, which she was unable to provide. pic.twitter.com/fkGqzVQQw2

“Well, I leave that to the investigators. You have seen an investigation done, … I encourage you to look at all of the work that Democrats have done in the House to continue to show the coverup by Donald Trump. And I think right now, this is extremely troubling and for your viewers watching at home, I would say, ‘I want a new President, and I want a new Justice Department, who’s going to remain independent, and who is gonna take into consideration the rule of law for anything else,” she said, again dodging Hemmer’s question. Continued Below

Hemmer told her that he asked her twice and didn’t hear an answer of proof, and proceeded to play a clip of Joe Biden’s remarks over General Flynn, during an interview on ABC News.

“Why would Joe Biden want to know about Michael Flynn at that time?” he asked.

She claimed: “Because, again, unmasking first of all, is trying to– make sure that you’re getting more intelligence. And when it comes to Michael Flynn, and as I’ve said this already, … this is going to backfire on Republicans. Because they are trying to find more information when it came to Micahel Flynn and his discussions with Russia.”

“I was looking for a crime,” Hemmer said. “I haven’t heard it there. I was asking for collusion, I haven’t heard that yet, either. … It’s almost the summer of 2020, there’s no evidence of it.”